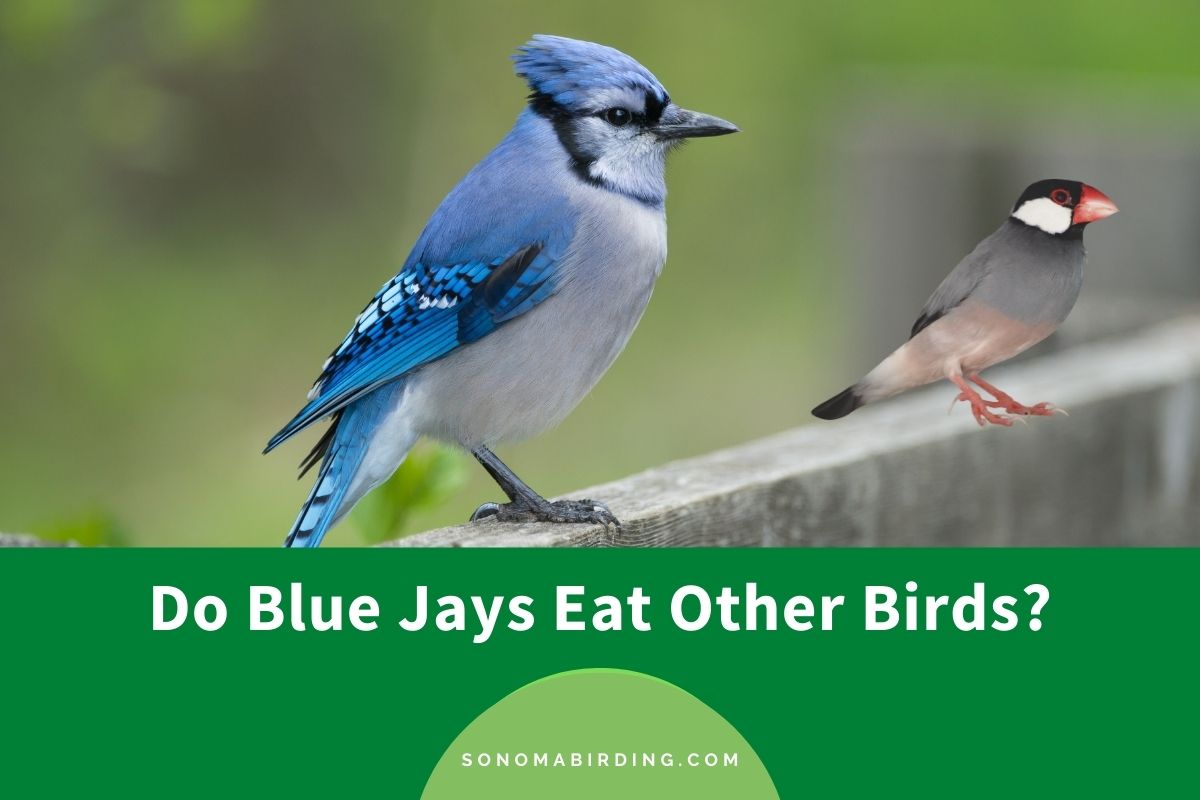 Blue Jays are considered to be one of the most striking members of the Corvid family. These passerine birds look so beautiful with their brilliantly colored plumage and pale, snow-like underparts that many birders put efforts to draw them into their backyard. However, it might seem unbelievable from their appearance, but blue jays also have an aggressive side to their personality.

Do blue jays eat other birds? Rarely. Although the aggressive nature of the blue jays has earned them a formidable reputation, they will not eat other birds under normal circumstances. The staple diet of these birds consists of seeds, fruits, and insects. There are very few instances (less than 1%) where blue jays have been found feeding on other birds, their eggs, or nestlings.

In this article, we aim to solve the conflict about blue jays eating other birds. Keep reading if you want to discover the truth behind it.

Can Blue Jays kill other birds?

If you’re wondering whether blue jays are capable of killing other birds or not, the answer is yes. These birds are quite large and powerful for a passerine and are not hesitant to use their brute force on smaller and weaker birds. This tendency is probably what makes them such bullies.

However, while the blue jays commonly bully other birds, they rarely take it far enough to actually kill them. These birds might be aggressive, but they’re not murderous.

Do Blue Jays feed on other birds?

Before we answer this question, let’s tell you about a scientific experiment that will clarify all your doubts:

Over a century ago, some scientists took the initiative to clarify the age-old myth about blue jays feeding on smaller birds like hummingbirds, robins, and their younger ones. They decided to inspect the stomach of some blue jays and see if they found the remains of other birds there. After the inspection, they found that only 1% of their stomach contents belonged to other birds and their eggs.

The experiment is a clear indication that blue jays do not normally feed on other birds or their younger ones. Even if they ever do it, it will probably be because of severe food scarcity.

So, if blue jays do not commonly prey on the other birds, what’s the basis of this assumption? Well, there can be two possible reasons behind it. First, they belong to the corvid family, in which several birds are known to eat smaller birds, such as crows and ravens.

The second reason is their own violent and bullying nature that could lead people to believe all sorts of false accusations against them.

Do Blue Jays attack other birds?

There’s a good reason why the blue jays are infamous for their bullying. If some of these birdies frequent at your bird feeder, you can easily notice how they tend to push around other, smaller birds. But have you wondered why do the blue jays behave so aggressively towards the other birds? Well, we might be able to help you with the answer:

Blue jays are exceptionally territorial birds. Once they claim an area as their own, they don’t want to see any other birds hovering around. If another bird dares to trespass their territory, they must be prepared to be mobbed by the blue jays.

For securing their food source

Since food is vital to the survival of the blue jays, much like any other living being, they tend to protect it most fiercely. Be it a tree whose fruits they eat, or a feeder on which they feed, the blue jays want it all to themselves; they’re not the kind that likes to share.

To protect their nest

All birds are fiercely protective of their nests since it is where their younger ones (eggs or fledglings) live until they are strong enough to fend for themselves. Blue jays are no exception to it and would not hesitate before attacking any bird that tries to come too close to their nest.

Fun fact: Other than birds, blue Jays might also come after animals like dogs, cats, or squirrels as a mob if they feel threatened by them.

Which birds do they commonly attack?

Being the bullies that they are, blue jays attack the other birds impartially. They can attack any smaller bird they find at your feeder, although hummingbirds, cardinals, finches, robins, and chickadees are their most obvious victims. However, just because the blue jays usually go after smaller birds doesn’t mean they will leave larger birds alone.

When attacking other birds, the blue jays prefer to form a band with their family and friends so that they can attack as a mob, outnumbering their victim.

As a group, they can also attack larger, predatory birds such as owls and falcons that often come to raid their nests and prey on their younger ones. Blue jays will also attack the raptors preying on one of their own.

Considering blue jay’s territorial and aggressive personality, it is natural to wonder whether these birds ever turn on each other in a conflict? However, you’d be surprised to learn that blue jays keep all their aggression reserved for other birds and animals and are pretty cool inside their community.

These birds are highly social and stay in a close-knit community, where they look out for each other and protect each other from external threats.

While a sight of blue jays bullying other birds is common for everyone, you would rarely find them fighting their own.

We’ve already established above that the blue jays lack the murderous instinct towards other birds, unlike the raptors. But do they eat other birds? Not usually. These birds have a diet consisting of seeds, fruits, berries, and insects. They don’t normally seek to eat the meat of another bird, nor are they scavengers.

If on a rare occasion, you do see a blue jay eating another bird, the bird was probably already dead before the blue jays got there.

Birds that can bully Blue Jays

Did you know that there are birds that can bully blue jays as well? As tough as these blue-crested birdies appear, even they cannot compete with these bigger bullies and cower from them. Let’s take a look at which birds can push around the blue jays:

How do Blue Jays feel about humans?

Blue jays are wild birds that do not usually interact with humans at all. They mostly prefer to stay out of our way and expect the same from us.

Are they afraid of us?

Because most blue jays will avoid eating from your feeder if you’re standing nearby, some people think that they’re afraid of us. However, that’s far from the truth. In reality, these birds feel vulnerable when they eat and, thus, prefer to do it in a quiet, undisturbed environment.

Can they attack us?

As we’ve mentioned above, blue jays would not want to have anything to do with us ideally. However, if you try to go too close to these birds, they will feel threatened and might act out. Although a lone blue jay will fly away, if they’re a group, they can attack you as a mob, and you might get hurt in the process.

Fun fact: The crest of blue jays is also raised when they sing or vocalize.

How can you protect your backyard birds from Blue Jays?

Blue jays are noisy and territorial birds that do have the annoying tendency of pushing around smaller birds. However, they are not the carnivores that drive pleasure in killing and eating other birds.

Despite their size and violent nature, these birds have a diet similar to any other passerine and enjoy eating seeds, fruits, and insects. Even if you spot them feeding on the fledgling or egg of another bird, remember that it is not their normal behavior.