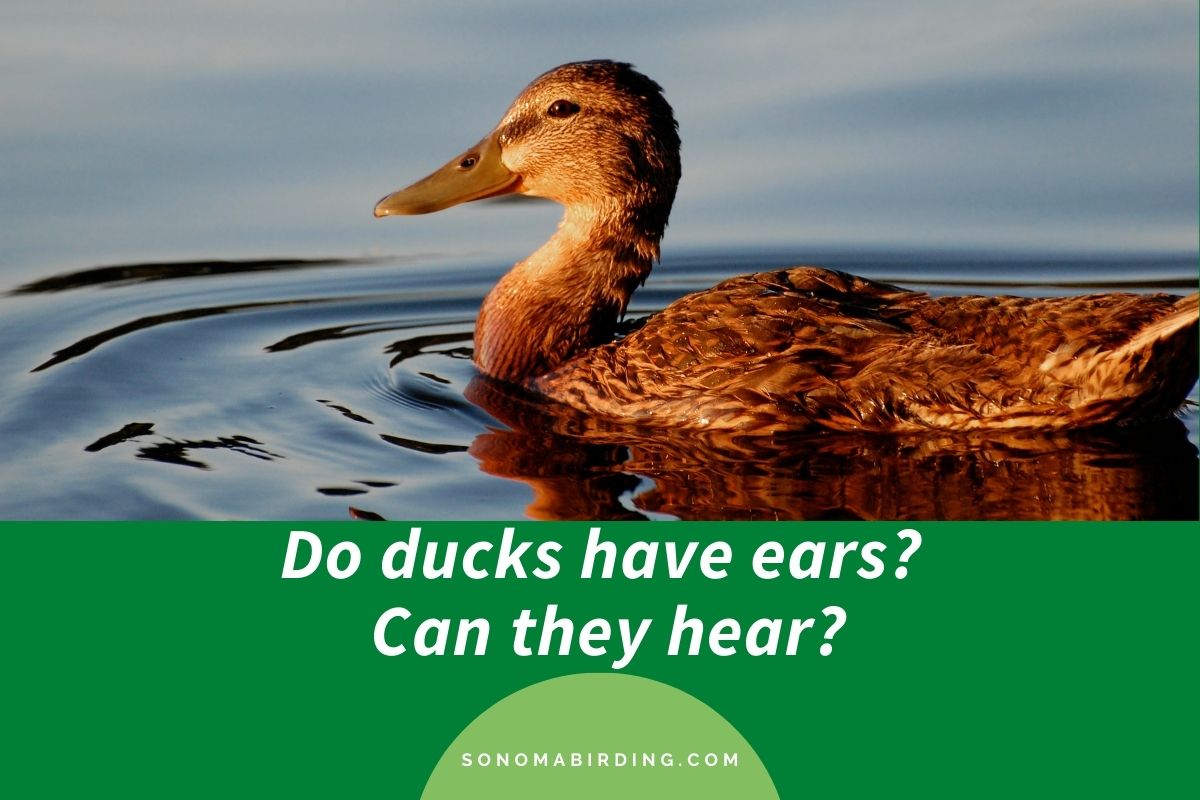 All of us can agree that ducks are universally adored waterfowls. Commonly found in lakes and rivers, these waterfowls are highly social and enjoy interacting with people. Despite being one of the most popular backyard birds, little attention is paid to the fascinating anatomy of these birds. Many birders are curious about their barely visible ear, another intriguing feature about which they know very little.

If you’ve ever wondered if ducks have ears or how they hear, then this article is ideal for you. You’ll learn everything you need to know about their hearing abilities here.

Contents show
How do ducks hear?
Do ducks have really good hearing?
At what age do ducks develop these hearing abilities?
Can you see the duck’s ears?
How can ducks hear if they don’t have ears?
What about geese and swans? How do they hear?
Conclusion
Related Articles

How do ducks hear?

Like all the other birds, ducks also hear through small funnel-shaped holes on both sides of their heads. These openings are located behind and just below their eyes. The area surrounding their ear is covered with feathers that extend from the back of their eyes.

These feathers provide their ears protection and reduce wind noise, which would otherwise interfere with their hearing.

As we all know, the external ear in mammals helps in the identification of sound sources by absorbing, reflecting, or diffracting sound waves. It might lead you to wonder how ducks identify sound sources in the absence of an external ear.

It might come as a surprise to many, but a duck’s head serves as its external ears. Sound waves are reflected, absorbed, and diffracted by the duck’s head. As you might’ve noticed, the heads of these waterfowls are slightly oval-shaped.

So, when sound waves from different angles of elevation strike their eardrum, the opposite ear determines the elevation. Due to this, they can always tell where a sound is coming from and whether it is coming from below or above them.

Like the human ear, a duck’s ear can accurately trace the direction from which the sound comes based on the volume of the sound waves. In water, their hearing ranges between 1-3 kilohertz.

When the angle of elevation ranges from -30 degrees to +30 degrees, their hearing system becomes more accurate in determining the sound source.

When they spot a predator, they may warn their friends by making alarm sounds before flying or swimming away for safety.

Do ducks have really good hearing?

Ducks have a keen sense of hearing and can detect sounds up to 400 yards away. Due to the relatively low rank in the food chain, they are aware that they’re prey for a variety of predators and must remain vigilant at all times.

Therefore, these birds can distinguish between different sounds and their sources. They can tell if a sound is coming from above, below, or on the same level as them.

Although duck’s ears function almost similar to that of humans, they are still capable of hearing and perceiving sounds. That is how they communicate with their peers and ducklings.

As gregarious birds, ducks always walk in groups to find food, share experiences, and warn each other of potential dangers. All of these activities require the use of one’s hearing senses. Even within their loud, noisy flocks, ducks can effectively talk with their mates and younger ones.

At what age do ducks develop these hearing abilities?

A fascinating aspect of a duck’s hearing system is that it begins to function effectively even before a duckling has hatched. A duckling can listen to and master the sound of their mother’s vocals from inside the egg.

It can prove to be helpful later when they emerge from the shell and can easily recognize their parent and respond to their commands.

These little birdies can also tell the difference between the mother’s voice and that of other ducks. This allows the mother to easily guide and warn their children in times of danger.

Can you see the duck’s ears?

No, we can’t see duck ears because their ear parts aren’t the same as those of humans or other mammals in general. Ducks possess small holes just behind and below their eyes instead of pinnae. Because stiff feathers cover the holes, they are difficult to see from a distance.

However, these feathers aren’t merely decorative; they shield their earholes from the dangerous elements and help to reduce distractions while flying. They also protect their eardrum from harsh winds.

The eardrum of a duck, also known as the “tympanic membrane,” is located superficially in the duck’s hearing home. If you gently lift the feathers that cover these holes, you can see it.

The stiff feathers of ducks help them collect sound frequencies in the same way that the fleshy flaps of our ears do. They behave like a funnel to direct sound, making the ears extremely sensitive. This also enables the ducks to decide where the noise is coming from.

Ducks can notify if a predator, such as a fox or a weasel, is nearby by using their ears. Their visual sense is also beneficial because it allows them to confirm what they hear and be aware of the presence of a predator or food in their surroundings.

How can ducks hear if they don’t have ears?

Just because you cannot see ducks’ ears doesn’t mean they do not exist. All birds, unlike mammals, lack external ear structures. Their ear openings are concealed by feathers on the side of their heads, just behind and slightly below their eyes.

Are you wondering how exactly they do it? According to recent research on crows, ducks, and chickens, it has been found that the shape of a bird’s head makes a major contribution to its hearing abilities.

What about geese and swans? How do they hear?

As most of you might already know, ducks, geese, and swans are all members of the same family. They’re not only closely related to one another but also have numerous similarities in their physical appearances.

While ducks have openings instead of external ears to help them hear, what about geese and swans? How do they hear? Well, they hear in the same way! Both these waterfowls also possess similar kinds of ears that they use to hear all kinds of sounds. While the placement of their ear-opening might vary slightly, the difference is almost negligible.

Let’s revisit our initial question: do ducks have ears? Yes, they certainly do. Just like all the other birds, ducks also possess ears that help them hear all sounds in their surroundings. Only their ears lack an external structure, unlike us, which gives them the impression of being earless.

Can Ducks Mate with Chickens?