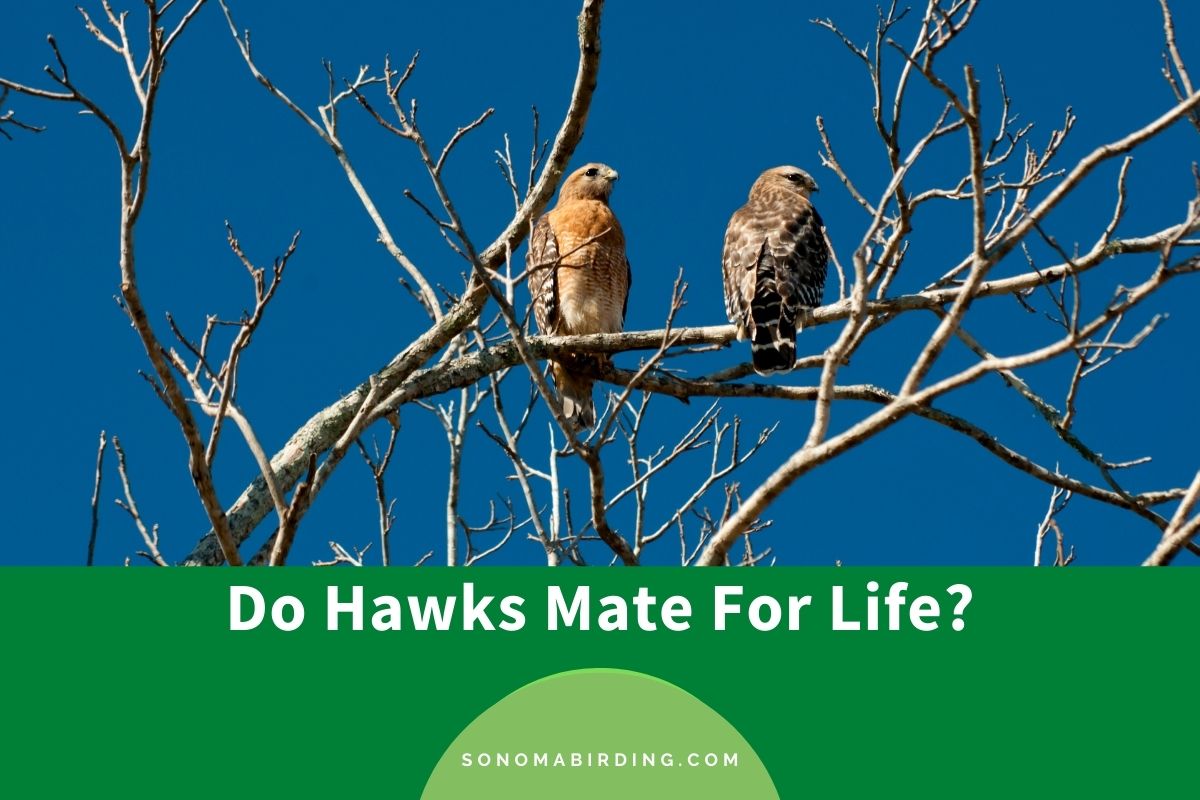 When it comes to being faithful in our romantic relationships, there’s a lot that we can learn from the birds. It might come as a surprise to many, but there are many birds that do not only stay faithful to one partner their whole lives but also mourn them deeply in case they die or are lost. Are hawks one of these birds? Let’s find out.

Do hawks mate for life? Not strictly. Hawks might remain monogamous for their whole lives if their circumstances allow them to. However, there are several factors that might prevent a hawk pair from staying monogamous. The death or capture of their partners or unsuccessful breeding in the past is some of the common reasons why a pair of hawks might choose to part ways and seek new partners.

Stay with us until the end of this article to know all about hawks’ mating habits, including their courtship rituals, mating and nesting habits, and much more.

Contents show
When do hawks reach sexual maturity?
How do hawks mate?
What happens after mating? (Nesting and incubation)
Do hawks return to the same nest every year?
Do hawks cheat on their partners?
Frequently asked questions
Conclusion: Do hawks mate for life?
Related Articles

When do hawks reach sexual maturity?

Like most other raptors, hawks have an average lifespan of about 16 to 17 years in the wildlife. However, in captivity, these birds of prey can live as long as 20 years.

Because hawks, being raptors, acquire a high level on the food chain, it is difficult to believe that there’s such a significant difference between their lifespan in the wild and in captivity. But if you take into other mortality factors such as hunting and roadkill, it might seem more reasonable.

So, when do these birds reach sexual maturity? Surprisingly early. Hawks become sexually mature between the age of 1.5 and 3 years; both sexes reach their maturity simultaneously.

How do hawks mate?

The breeding season for these majestic birds begins in early spring, from March to May. During this time, you might have noticed many hawks circling the skies, swooping straight down, and then rising back up again. This is actually a part of their courtship rituals, which the males perform in order to attract a suitable female for mating.

The courtship in hawks is a glorious, semi-choreographed maneuver that they have perfected over the course of several millennia. The mating pair first makes elegant aerial circles at a high altitude.

The male hawk then dives straight towards the ground, and picking itself up at the last moment, flies back up to where the female is still circling the sky. This ritual is supposed to be a valiant display of their agility and strength for their prospective partners.

As soon as the courtship rituals end, it’s time for the hawks to mate. As you can imagine, the mating procedure in birds is quite different from our own since they do not have developed sexual organs like humans.

In fact, while mating, the male and female hawks simply rub their cloacae together. While rubbing, the sperm from the male’s cloaca gets ejected into the female’s body.

The sperm then travels through the female’s body into their reproductive tract, where the sperm fertilizes the ovum. The whole reproductive process takes about 10-15 seconds and is also referred to as the “Cloacal kiss”.

What happens after mating? (Nesting and incubation)

After the mating season is over, the hawks make their nest, incubate their eggs, and raise the newborns till they are ready to leave the nest. In this section, we’ll tell you more about the topics mentioned above.

Unlike many other birds, the male hawks do not abandon the females after mating. Instead, they help them in building the nest where the female will soon lay their eggs. Hawks usually build their nests at a certain height; you will often find their nests located in the crown of a tall tree or rock holes.

These nests are 24-30 inches wide, containing a 4 to 5 inches deep crater in the middle. Both the parents work together, using sticks that have a diameter of half an inch, and are about 2 inches long.

Once the structure of their nest is ready, they line it with leaves, moss, grass, vine, and whatever soft material they can find. Although their nest is loosely structured, it is firm enough to hold both the hawks, their eggs, and later, their nestlings.

When it is time to lay the eggs, the female hawks lay their egg in their nests. Each female lays about 1-3 eggs in a single breeding season. Their eggs are dull to bluish-white in color, with several non-uniform, reddish-brown splotches and spots.

Unlike other bird species, it is normal for the mother hawk to leave the eggs bare, i.e., she does not continuously roost on top of the eggs. But it would be a mistake to think that hawks are not attentive parents; both the parents are fiercely protective of the eggs and look over them with great vigor.

Their nest is never vacant, which means that either the male or female hawk is in the nest at all times. The incubation period lasts for 28-32 days.

After the long incubation period, the baby hawks are finally born. Eyas (young ones of the hawks) are born blind and fully covered in white down. The growth rate of these nestlings in the first few weeks is very slow. For the first 44-48 days of their lives, they eat a large amount of food.

During this time period, the mother hawk tries to stay with them as much as possible. However, due to the large amount of food required by the babies to grow, both parents need to hunt for food; they usually take turns to go hunting.

After the first 50 days, the fledglings are almost as large as adult birds. They spend their last days (7-10 days) in the nest, standing on its edge and flapping their wings, trying to fly.

Do hawks return to the same nest every year?

As you already know, hawks are known for being solitary birds. They prefer to hunt and live alone and only seek the company of other hawks during the mating and breeding season. It is one of the main reasons why these birds often lose their partners during migration.

However, hawks are also known for being fiercely territorial. When they return home from migration, they prefer to inhabit the same nest every year until it is too damaged or removed by humans. Cooper Hawks, which tend to build a new nest every year, are the only hawk species that are an exception.

Do hawks cheat on their partners?

All of us can agree that the concept of cheating, although widely condemned, is still prevalent in our society. But can the same be said about hawks? Do hawks also cheat on their partners? No, they don’t. Hawks are fiercely loyal and protective of their partners.

In fact, hawks are known to injure other hawks that try to attract their mates severely. Isn’t that romantic? However, in case a hawk’s partner dies or is lost during migration, the remaining hawk will seek another mate in the next season.

Do hawks mate in the air?

No, they don’t. Like the birds, hawks also mate on the ground, making it impossible for them to mate in the air. However, most people confuse their aerial courtship displays to be mating and believe otherwise.

Are all hawk species solitary in nature?

No. The Harris’ Hawks are an exception to the otherwise solitary nature of hawks. These birds are very social and tend to live in large groups. These birds might not be strictly monogamous, but they often share the responsibility of protecting each other’s nests and hunting for them.

Conclusion: Do hawks mate for life?

Let’s revisit our initial question: do hawks mate for life? Yes, they do. All hawk species are known for their monogamous nature and will stay with the same partner their entire life.

With that being said, there are some special circumstances under which the pair of hawks might have to part ways, like when one of them is dead or gets lost. Moreover, if a couple fails to have a successful breeding season, the two might mutually decide to seek a different partner in the next season.

Hawk vs Eagle vs Falcon: What’s The Difference?

Do Cardinals Mate For Life?