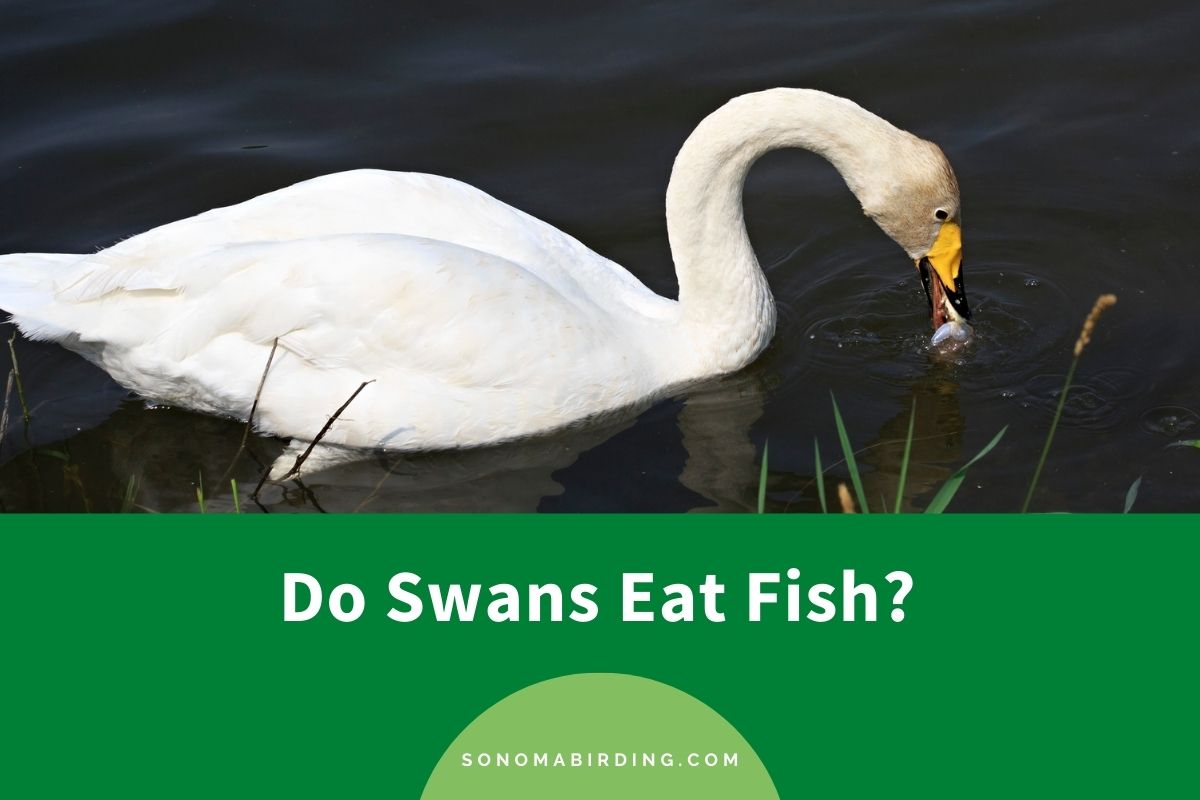 Popularly recognized as the symbol of grace and wisdom in spiritualism, swans are one of the oldest birds in the world and are just as royal. They’re essentially waterfowls and belong to the Anatidae family, together with the ducks and geese.

Within their family, these birds resemble the geese more closely than the ducks, having a taller body and a long neck. However, the gentle and graceful vibes swans produce are unparalleled by any other waterfowl or bird, for that matter.

The main reason behind swans largely being considered harmless lies in their herbivore diet. But what if we told you that your aquatic friends might not be as innocent as you assume them to be? Are there any traces of animal matter in their diet? What about fish?

Do swans eat fish? The truth is, swans do prefer plant matter to animal matter and are, therefore, primarily herbivores. However, since aquatic vegetation is their primary food source, small invertebrates, frogs, or fish might likely get caught in their food. In this manner, they can consume fish unknowingly. The cygnets are more likely to eat fish than adults.

Swans are indeed peace-loving creatures that pose no threat to you or any other living being, no matter how small. In this article, we will talk about the diets of different swan species and see if fish can fit into them.

Can Swans even eat fish? Aren’t they supposed to be herbivores?

You might have read in many places that swans are herbivores. And all herbivore animals tend to stick to plant matter strictly, don’t they? Then how come swans are able to eat fish?

Well, the truth is, swans are just primarily herbivores and not completely herbivores. And while these terms might sound the same and interchangeable, they truly aren’t.

In other words, swans are omnivorous birds that enjoy eating plant matter more than animals and, thus, have a mostly plant-based diet.

As you might have guessed, birds as large as swans need tons of energy to maintain their daily lifestyle. And a plant-based diet is not the most convenient for them since the cellulose in plants is difficult to break down easily.

As a result, they need to eat a lot in order to function properly. But to swans, eating more plants is preferable to eating animals; that’s how deeply herbivore they are. So, it mustn’t be difficult to imagine that they won’t eat fish willingly. But why else would they fish at all? Let’s find out.

Yes, absolutely. In all the reported cases of swans eating fish, it was seen found that the poor swans had never eaten them on purpose.

Like other waterfowls, swans are also aquatic birds that spend a majority of their lives in large water bodies. Their food comes from the water; these birds primarily feed on the aquatic vegetation that grows on the surface of the water.

At times, you will also find these long-necked birds putting their heads inside water. But they’re only digging deeper for more plants and not the aquatic creatures living inside.

Small creatures like tiny fish and frogs, tadpoles, fish eggs, worms, and mollusks often get stuck or entangled in the weed growing in water. When the swans eat these, they end up eating these creatures without meaning to.

It is also the reason why most fish consumed by the swans are small enough to remain undetected in the aquatic plants and weeds.

Different Swan Species and their diet

To confirm the validity of everything we’ve discussed, let’s dive into the diets of all the swan species in the world. Since there are only six of them, it won’t take long.

Being the largest extant members of the waterfowl family, the Trumpeter Swans are a large, North American swan species closely related to the Whooper Swans.

Of all the birds found in North America, the Trumpeter Swans are not only the tallest but also the heaviest ones. The adults are sexually dimorphic, with the males being larger and heavier than their female counterparts. They possess a white plumage, with black eyes, bill, and feet.

Trumpeter Swans are gregarious feeders and are often seen munching on food during the daytime and at night. The adults’ diet consists mostly of aquatic plants that remain submerged in water.

Sometimes, their cygnets consume small crustaceans and fish, their eggs, and aquatic insects.

Pronounced as “Hooper Swans,” the Whooper Swans are a large swan species that inhabit the Northern Hemisphere. In appearance, these swans closely resemble the Tundra Swans but are considerably larger.

They have completely white plumage with dark feet and a large bill that is colored in the combination of black and yellow; the yellow part is larger than the black one. They’re highly vocal birds and produce loud calls similar to that of the Trumpeter Swans.

The Whooper Swans strain the waterbodies looking for plants. These swans enjoy plants that grow at the bottom more than those on the surface. Eating fish is highly unheard of in their species.

Endemic to Euroserbia and North Africa, the Mute Swans are large swans that are closely related to the Black-necked Swans.

The adult sexes are distinguished by their size; the males are larger than their female counterparts. They also possess a large knob on their bill, which is smaller in the females. Both sexes have white plumage with a touch of buff to their heads. Their eyes are black, with a black marking on their otherwise orange bill.

Mute Swans have a diverse diet, feeding both on land and in water. They’re most commonly spotted eating small fish, mollusks, worms, and occasionally even frogs.

Also referred to as “Bewick’s Swan,” the Tundra Swans are a Holarctic swan species. While some consider these swans to be conspecific, others tend to split them into two separate subspecies: Whistling Swans (larger) and Bewick’s Swans (smaller).

In appearance, Tundra Swans closely resemble the Whooper Swans and have an overall white plumage with a black and yellow bill. However, their bill has more black and less yellow in it.

The diet of Tundra Swans consists mainly of plant matter, but they’re also seen eating arthropods and mollusks on some occasions. However, there have been no reported incidents of them feeding on fish.

Endemic to South America, the Black-necked Swans are a large swan species, the largest within their range. These swans are closely related to the Mute Swans and are also among the silent swan species.

Within their genus, the Black-necked Swans are the smallest species. As their name suggests, these swans have a black head and neck, with two thin white eye-stripes. Their bill is greyish in color, with a large, red knob located at its base.

Black-necked Swans have an omnivorous diet that consists of vegetation, fish spawns, and insects.

Black Swans have black plumage with faint markings on their back and a pink bill with a white tip. Their underwings are white but can only be seen in flight.

Black Swans are herbivores and feed on aquatic and marshland plants almost exclusively.

It is true that the cygnets or baby swans are more inclined to feed on fish or other animals, as seen in the case of Trumpeter Swans. But have you wondered why? Well, for two reasons.

Firstly, like all other baby birds, the cygnets also need more protein growing up than the adults. And because animal matter contains more of it, eating them is beneficial for them.

Another reason is that they’re less capable of separating animals from their food than their parents. Therefore, fish, insects, or other aquatic creatures are more likely to enter their mouth.

With this, we’ve come to the end of our article. Returning to the question asked in the beginning: do swans eat fish? If you’re curious about the diet of swans in general, you will find that fish is not a significant part of most swans’ diets.

However, if you’re wondering whether or not they’re capable of eating fish, the answer is “yes.” While swans generally prefer a plant-based diet, they are originally omnivores and thus capable of digesting small fish and other aquatic creatures.

300+ Beautiful Names For Your Pet Swan