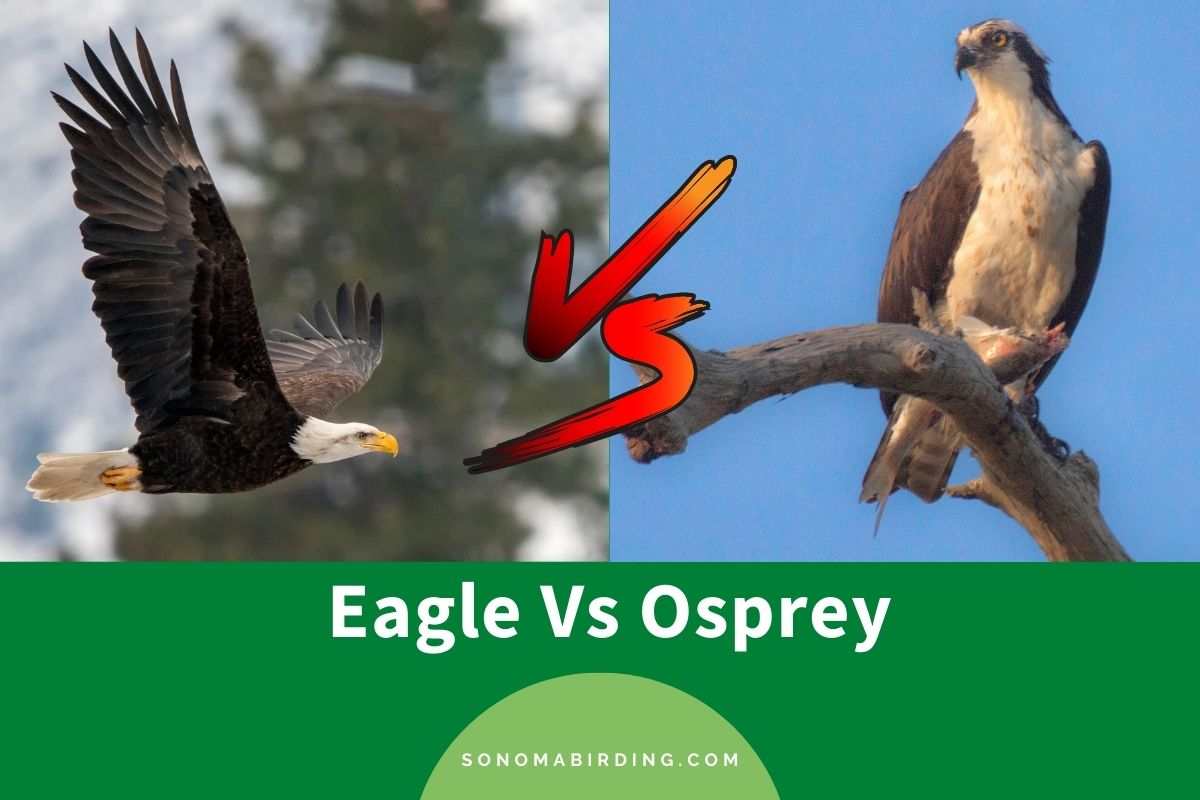 Have you ever seen an osprey and been confused as to why it looked so similar to an eagle? And wondered if they were related in any way? They’re probably the most confusing birds of prey you will ever come across. Both are large and fierce predators with many similarities but have their own unique features. Let’s dive into this article and explore the differences between the two birds.

The main difference between Eagle and Osprey is the size. An adult Bald Eagle can weigh about 14 pounds. Whereas, Osprey are comparatively smaller in size and weigh around 3 – 4.4 pounds. Also, they differ by overall body structure, color, nest, hunting techniques, etc.

Continue reading till the end to find out a more detailed comparison between these two amazing birds, the Osprey, and the Eagles. Note that sometimes I would be considering the example of Bald Eagle specifically while talking about Eagles for better comparison. So without further ado, let’s get started!

Eagle and Osprey, both are birds of prey. In terms of scientific classification, they both belong to the same order, “Accipitriformes.” However, they belong to different families.

Note that the word “Eagle” actually refers to many large birds of prey of the family Accipitridae. But the word “Osprey” specifically refers to a fish-eating bird of prey which is also known by other names such as River Hawk, Sea Hawk, Fish Hawk.

Also, Eagles have more powerful and muscular thighs and strong wings so that they can fly high and fly long distances. But on the other hand, Osprey doesn’t have such a strong body structure in general.

Ospreys are usually smaller in size. They have a white-colored chest, grey-colored legs, and distinct dark-brown colored eye strip.

However, in the case of Bald Eagles, they grip with three in front and only one in their back.

Eagles can eat a variety of things such as fish, mammals, reptiles, and other animals.

However, note that Osprey is called a fish hawk and it is for a reason. The diet of an Osprey consists almost exclusively of fish. They prey mainly on fish.

By the way, if you ever wondered about the difference between Eagle and falcon, I would also highly encourage you to read my detailed article on Eagle vs Falcon.

In terms of size, specifically talking about Bald Eagles, they are much larger than Ospreys.

So it is clear that Bald Eagles are bigger than Ospreys. It is easy to note this difference in size when you can see these birds side by side flying.

Now in case, you are not able to spot the difference between these birds in terms of size then another thing you can look for is their body color.

Considering Eagles, and for better comparison, let’s consider a specific example of an Eagle, a Bald Eagle.

So in Bald Eagles, they have white heads and tails. And they have dark-colored chests. Their legs are yellow.

The head of a Bald Eagle is solid white as adults but brown as juveniles. However, the head of the Osprey will stand out with distinctive brown colored stripe through their eyes which is in contrast with its white head.

However, on the other side, Ospreys have a solid white breast feather with occasional brown modeling towards the top.

You can notice different types of colors depending on the type of Eagle you are talking about. But, in the case of Osprey, we can’t find variety in coloration.

Also, if you watch the Bald Eagles and Ospreys flying then it can help you to tell the difference between them.

When Ospreys fly, their wings make an ‘M’ shape formation. Ospreys fly horizontally with their wings being bent at the wrist. But, Eagles, especially considering the Bald Eagles, hold their wings flat.

In case you are interested to know about the difference between Bald Eagle and Golden Eagle, I would encourage check out my detailed post here: Bald Eagle Vs Golden Eagle.

The tails of Bald Eagles are solid white on mature adults, modeling brown and white on Juveniles.

Oppositely, the tails of an Osprey are barred, alternating between white and brown.

Osprey and Eagles both use things like grasses, large sticks, corn stalks, etc. to build their nest. And they both keep on building their nest year after year, which ultimately results in a very large nest.

However, there is a difference between their nest, and that is the place where they build the nest.

Ospreys build their nests in open areas and closer to the water where they can get access to enough food like fish. You can find them building nests on artificial nesting platforms or any cell phone tower, light poles, etc.

On the other hand, the nest of the Eagle is built high on the largest tree in the area they live. Their nests are larger and more cone-shaped.

If we specifically talk about Bald Eagles, they like to build their nest in conifer trees, in the high position near the trunk.

Note that the main point of difference is that, Eagles are rarely seen building their nests on man-made structures.

Bald Eagles firstly scan the water to see if there’s any fish swimming near the surface or not. They might closely observe from the air or a close perch.

Once they can spot the sign of fish, they launch their flight and come close towards the surface, and then they stop flapping their wings.

They keep on gliding silently and dip their deadly talon into the water and snatch their prey. So this is how a Bald Eagle hunts and catches its prey.

Note that this technique is not always successful because any fish can wiggle free of the catch when they are not lifted in the air properly.

Now let’s talk about the technique of the Osprey. This bird first scans over the water to find its prey, by flying above the water. Now, this bird also flies closer to the surface, but here’s the difference!

Instead of catching its prey right from the surface, it makes a sudden deep dive in the water. This way, the Osprey is not only able to adjust its position but also catches the fish in its talon while sitting on the surface.

Note that the Osprey is small in size and it has heavy, waterproofing oils embedded in its feathers, so it can stay buoyant. Once the Osprey feels confident about the hold of the fish, it flies away with its prey secured in its talons.

Technically, an Eagle is bigger more powerful than an Osprey, so it should win in the fight. However, it’s not that easy to say that always because of Osprey’s speed and agility.

But as a general rule, it seems like the Eagles, such as the Bald Eagles are the ones who launch the attack first and may also dominate in some cases.

The Bald Eagle can catch the prey from the Osprey. Or, they might even attack their chicks.

Do Eagles And Osprey Get Along?

Eagles and Osprey don’t get along even though they might share the same habitat because Eagles are actually the competitors of Ospreys. Eagles can snatch away the prey of Osprey, drive them off from nesting areas, and might even kill their young ones.

Throughout the world, it can be said that Eagles are the main competitors of Osprey. Different Eagles compete with Osprey in different locations of the world.

Perhaps the speckled appearance of the chicks of the Osprey that helps in camouflaging them in the nest might have developed as an adaptation to decrease the predation by birds such as Bald Eagles.

In short, to avoid confusion between Osprey and Eagle, you just have to take a closer look at them and observe all the differences you learned in this article.

You can compare their size, color, overall body structure, the place where they build nests, hunting techniques, etc., and depending on that you can identify the right bird. Hope you found this article helpful.

Now, I would also highly recommend you to check out my complete guide on Eagle symbolism and meaning.