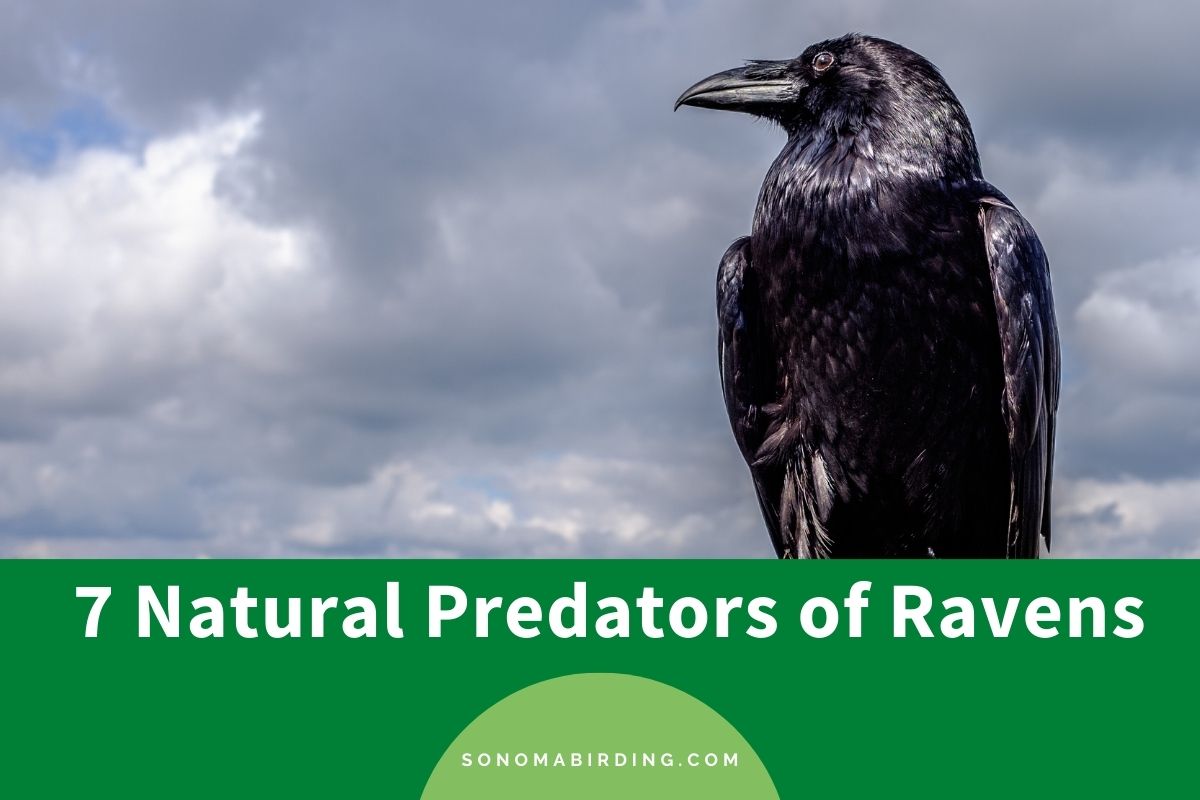 Ravens are often depicted as wicked and clever birds in ancient mythologies. However, did you know that these birds are quite intelligent in reality as well? The reason behind their intelligence might be the fact that their brains are larger than any other birds’. ​While not always successful, it’s interesting to see what creatures through their evolutionary pathways have developed the ability to hunt them. Let’s dive in and find out what are the natural predators of ravens.

Ravens are large birds and are not threatened by most other birds. The only birds that feed on ravens are eagles, owls, hawks, and goshawks. The eggs and nestlings of ravens are in more danger since they are stolen and killed by almost all birds of prey. Hawks and eagles are the biggest threat to ravens. They feed on live ravens, dead ravens, and their eggs and nestlings.

Have you just spotted a raven nest near your house and worried about the well-being of the bird and the nestlings? Stay with us till the end, and we will tell you everything you need to know about the natural predators of ravens. It will also include the birds and mammals that are a threat to the ravens’ eggs and hatchlings.

As you must already know, the most dangerous predators of any bird would be another larger, deadlier bird, since they can easily reach them in the sky, in their nest, and so on. In this section, we’ll learn about the birds that prey on ravens.

Bald Eagles and Golden Eagles are among the top predators of ravens. Ravens and crows have been known to have a rivalry against the eagles for a very long time. Even when eagles don’t kill them, they always chase these birds when spotted and harass them into dropping their food if they have any.

Like all other raptors, eagles kill these birds with their exceptionally sharp and powerful talons. Each foot of an eagle has four talons, three in the back facing forward and one in the front (hallux) facing back. Moreover, their strong leg muscles also help them in carrying prey for long distances.

Owls are another bird of prey species that feed on ravens. While these birds do not have any personal rivalry with ravens, they will not hesitate to feed on them if they ever get a chance.

Like all other birds, owls do not have teeth. However, their hooked beaks are sharp enough to tear into the flesh of their prey, often crushing its skull and other bones.

Moreover, sometimes, they can also swallow their prey (mostly small birds) whole. After a few hours, the undigestible parts, like the fur and bones, are regurgitated in the form of pellets.

Like eagles, hawks are also natural predators of ravens. Hawks and ravens are often seen fighting each other, mostly to defend their own eggs and nestlings. However, if there’s a shortage of food, hawks will prey upon the ravens too.

Like the eagles, the most efficient hunting tool in the anatomy of hawks is their talons. They have four sharp talons on each foot, which they use to rip apart their prey or to grab it in flight and carry it somewhere far for a peaceful meal.

Since we’ve already discussed how most birds of prey feed on ravens, the fact that goshawks feed on these corvids shouldn’t come as a surprise. But what’s truly surprising is the hunting technique of these raptors.

Although goshawks have the same hunting tools as eagles and hawks (powerful talons and sharp beaks), they do not usually employ them during the first stage of their hunt.

Goshawks are very fast fliers, and they take full advantage of it. They chase their prey, in this case, ravens, till it is too tired to fly. They fly with short bursts of speed, often crashing into branches and thicket in the intensity of the chase.

When the prey is finally tired, the goshawks move in, dig their claws into the bird, and twist its neck with their beak, killing it effectively.

Mammals that prey on Ravens

However, keep in mind that mammals preying on ravens is highly unusual; it is very difficult for these animals to get a hold of an aerial creature, especially intelligent birds like ravens.

Coyotes are large mammals that generally do not go after birds like ravens. The birds that they do hunt are usually small birds, like sparrows, or water birds, like swans and pelicans, which are closer to the ground. When they are hunting in a pack, however, they can easily take down wild turkeys.

Ravens are not the ideal prey for coyotes since they are aerial creatures and, thus, not easy to get a hold of. However, if these mammals ever get an opportunity to feed on them, they will not pass it up.

For instance, these birds are often seen preying upon injured ravens. Sometimes, when there is a food shortage, the flock can also lay a trap for a raven and surround it from all sides, effectively cutting off any prospect of escape.

Cougars are large cats, one of the deadliest predatory animals on earth. They usually prey on large animals, too, such as deer, coyotes, porcupines, and raccoons. However, on some rare occasions, mostly in the case of a food shortage, cougars might go after birds like ravens.

The main hunting tool for cougars is their stealth, a skill found in all cats, small and large. They slowly stalk up to their prey (in this case, ravens) without making a sound and then wait for the right moment when the prey is the most vulnerable.

Then, they pounce on their prey at once, grabbing it with their paws and sinking their sharp teeth into its neck, killing it effectively.

Let us now move on to reptiles that feed on ravens, more specifically, snakes. Snakes are a dangerous predatory species that are a threat to almost all other creatures on earth, including humans. This is due to the fact that they have a special hunting technique unlike any other animal, bird, or reptile on earth.

Firstly, these reptiles lure in their prey by many different ploys, the most common being the worm-tail. Now, as you may or may not know, all snakes have beautifully colored tails. Moreover, some species also have a rattle on their tail, using which, they can replicate certain insect-emitted sounds.

So, they disguise their tails as worms and take cover under leaves or logs. When an innocent bird lands near their range, they slowly start wrapping their scaly body around the prey. At this point, the prey can do nothing as the snake coils around its body, choking it and eventually killing it.

Snakes are opportunistic hunters; if the circumstances are just right, a python can even take down an eagle or hawk. However, as a general rule, pythons can prey upon all birds except the larger birds of prey.

This would imply that they can feed on songbirds, waterfowls, and yes, ravens too. However, ravens are intelligent and large birds, so not all species of snakes can feed on them. Only the larger snakes, such as pythons or cobras, pose any real threat to them.

Predators of Raven’s eggs and nestlings

Ravens are fiercely protective of their eggs and nestlings and are known to scare off even the large birds of prey from their nests. Whenever they see a bird approaching their nesting site, they go after them with their sharp bills. Even humans have been hurt by ravens, that have been known to draw blood.

Be that as may, they cannot protect their nests at all times, and eagles, hawks, and falcons are some of the most dangerous predators of the ravens’ nests.

All the predators of ravens are a definite threat to the welfare of their eggs and nestlings as well. Moreover, they also have other predators of their own since they are more vulnerable than the ravens.

Raccoons, coyotes, snakes, hawks, all species of eagles, foxes, squirrels, rats, and other small birds like woodpeckers and robins are all potential threats to a raven’s nest.

As we have already talked about all the predators of live ravens and their eggs and nestlings, let us move forward with the last topic of today’s article: who eats dead ravens?

As we come to the end of this article, let us recap what we learned today.

Ravens are large, strong, and intelligent birds, and not many other animals or birds can prey upon them. The birds that do prey on them are large raptors, such as eagles, hawks and owls, and goshawks.

When it comes to mammals, it is very difficult for them to ever feed on a raven, as it is not easy for them to get a hold of an aerial creature, no matter how big or small. Snakes are also a threat to ravens, but only the larger snakes, such as cobras and pythons, pose any real threat to them.

The eggs and nestlings of ravens are the ones with more predators due to their vulnerability. However, ravens have proven again and again that they are capable of defending their nests to a great extent, just not all the time. The biggest predators of ravens’ nests are eagles, hawks, raccoons, coyotes, snakes, and other songbirds.

Lastly, we talked about the birds that prey on dead ravens, which are mostly scavenging birds, like vultures and crows. Moreover, eagles also have a tendency to feed on carrion and would not hesitate if they found a dead raven.

Grackle vs Crow: How To Tell the Difference?