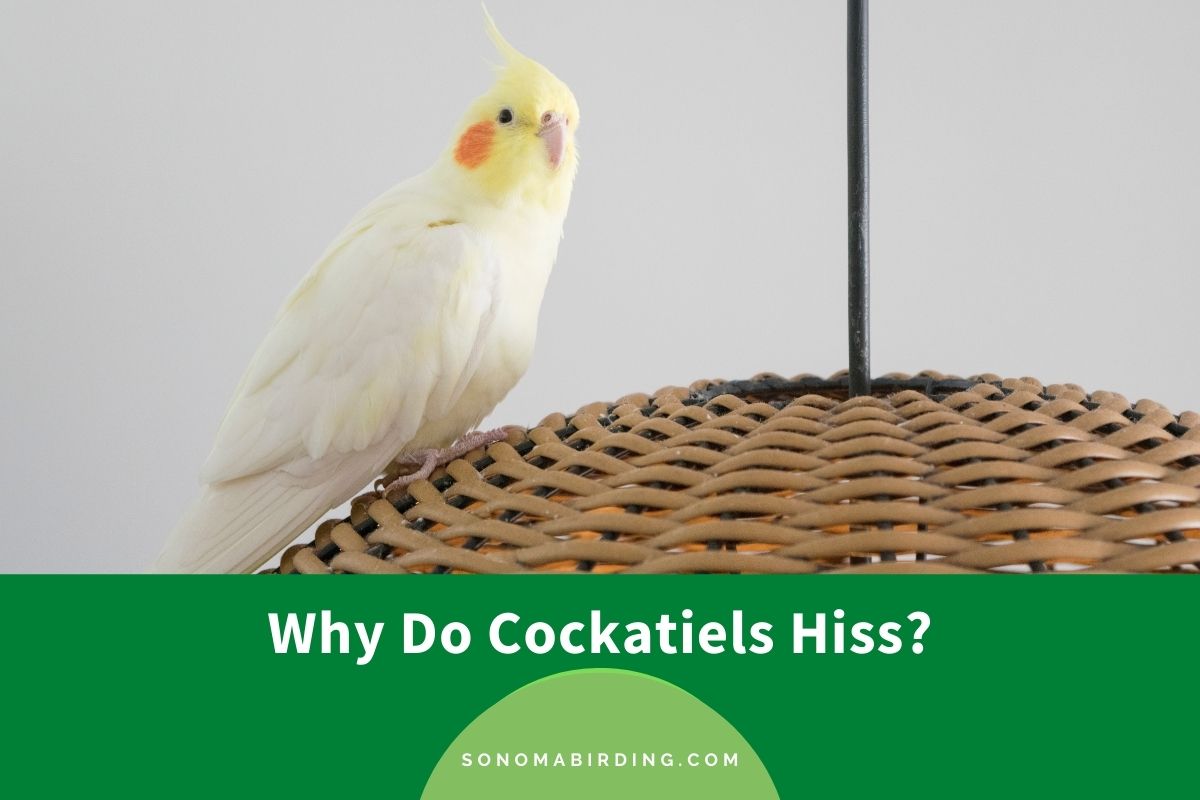 Parrots like cockatiels are birds of many sounds, a quality that makes them adorable house pets.

These birds do not only communicate with you, but also keep the room filled with some sound at all times, be it a sweet serenade, a random chirp, a long-drawn whistle, or a high-pitched squawk.

Even when they’re sleeping, they produce a soft, cheep-like sound. However, hissing is by far the strangest sound your feathered pets can make.

Why does your cockatiel hiss? There can be several reasons behind your cockatiel’s hissing. They could be trying to defend their territory, feeling unwary of an unfamiliar person or animal, or simply feeling frisky, seeking out a mate. In some cases, their hissing can even have a positive meaning.

Have your feathered pets been hissing a lot lately? Are you wondering how to fix it? We’ve got you. This article will discuss all the likely reasons behind their hissing and how you should tackle it.

When you hear the term “hissing,” the first animal that comes to mind is often the Snake. Does the hissing of cockatiels sound similar to that? Yes, cockatiels also produce the same “sssss” sound while hissing.

Their hissing sounds are intense but not lengthy, lasting only 1-2 seconds. If they’re being bothered by something, they can make these noises consistently, about 5-8 times in a single minute.

The most common reasons behind your cockatiel’s hissing

Like humans, cockatiels also have an individual personality and could be hissing for a myriad of reasons. However, to help you figure it out, we’ve narrowed down the most common circumstances that might lead to hissing.

Let’s explore these below:

When they are defending their territory

It might come as a surprise to many, but cockatiels are not known to be one of those parrot species that can get territorial easily.

\However, when these birdies already have restricted space in captivity, you should expect them to be protective of their personal space, be it their cage or their favorite hiding space.

You must have more than one cockatiel for such a thing to happen. While these little parrot species enjoy company, at times, they might hiss at each other violently. When this happens, you shouldn’t worry; just let one of them out of their cage for a while, and they might feel better.

However, if this happens frequently, you must ask yourself whether the size of the cage is big enough for all its residents.

Many cockatiel owners buy a smaller cage when they bring baby cockatiels home and then forget to get them a bigger cage as they grow up. It could cause discomfort to your pet friends and lead to their frequent hissing.

You can easily solve this problem by getting them a bigger cage where they can all co-exist comfortably.

Although cockatiels are chatty little birds during the day, they are easily spooked in the nighttime. They’re extremely sensitive to any unexpected noise or shadow in the dark and can suffer from night frights.

It can be dangerous for their well-being, as they furiously flap their wings around trying to get airborne and might even injure themselves in the process.

Although cockatiels usually emit shrill screams during the night terrors, they are also known to hiss violently sometimes.

If you ever catch your pets in a night fright, your first course of action should be to switch on the room’s light. You should approach them slowly and try to talk to them in a calm, soothing tone.

Many cockatiel owners have claimed that singing softly also helps. Whatever you do, avoid touching them until they are visibly relaxed, or they might try to bite your hands.

To express their distaste

Do you ever hear your feathered pets hissing right after you place something inside their cage (often something edible)?

Well, if they are hissing at it, it is their way of expressing distaste. Maybe they don’t want to eat what has been served to them and are trying to tell you that by hissing.

In some cases, when you’ve forgotten to remove the residue of food left by them, and it starts to emit a bad smell, they will keep hissing at it. You might want to remove it from their cage to get them to stop.

When they are intimidated by a new person or pet

Although it takes cockatiels very little time to familiarize themselves with people, when they see someone new in the house, you can expect them to hiss at these people in the beginning, particularly if they try to come too close.

The same thing can happen if you bring home a new pet, be it a cat, a dog, or another animal. Your cockatiels will feel threatened by all the love and affection the new pet is getting and will, therefore, hiss at them.

To avoid this from happening, you should spend time with your feathered pets like before, make them feel loved and treasured.

When they are hormonal/ seek a mate

Among the cockatiels, the males are more prone to feeling hormonal and hiss than the females. It usually means that they seek a mate for themselves, which isn’t necessarily a bad thing.

However, if they’re alone in their cage and cannot find a partner, their frustration might make them hiss more vigorously. At times, you might even find them bobbing their head while hissing and singing songs in between as well; all these are a part of their courtship rituals.

When they are hurt or in pain

Cockatiels are small parrot species that are often the prey of larger birds in the wild. Therefore, these birds tend to hide any signs of weakness, even in captivity.

It is possible that your little pets are hissing because they have been hurt and injured but don’t want to tell you. If you feel it could be the reason behind your pet’s hissing, you should inspect them closely for any signs of wound or injury and tend to it carefully.

Is your cockatiel hissing while they eat?

Apart from all the reasons mentioned above, is there any other time you hear your feathered pets hissing? Well, if they’re eating while hissing, you can’t blame them.

Like most other animals, including humans, cockatiels also like to enjoy their food in peace and wouldn’t entertain any interruptions while eating.

If you try to pester them or engage them in something else when they’re eating, they might hiss at you as a warning to leave them alone.

Moreover, if a person unfamiliar with the tries to interrupt their mealtimes, they’ll hiss even more furiously. It is a natural reaction that you shouldn’t be concerned about; try to give them their privacy when they’re eating, and they’ll be fine.

Why do baby cockatiels hiss?

For those of you who don’t know it, baby cockatiels are incessant hissers. These little birdies can be hissing as soon as they’re ten days old and tend to hiss at everything and everyone that distresses them.

For instance, if you keep checking their nest now and then to see how they’re doing, they might raise their tiny crests and hiss at you. To an onlooker, it might seem cute, but it puts these babies in distress and is not good for them.

There’s another time when the baby cockatiels make a hissing sound: right after they’ve had food. However, this hissing is not a sign of annoyance or distress.

On the contrary, they’re hissing to express their content and excitement and being well-fed. These birdies will also hiss contentedly when you hand-feed them as a means to communicate their pleasure.

Therefore, when you hear them hiss after their meals, you should take it as a good sign.

What should you do when your cockatiel hisses?

Earlier in the article, we discussed all the probable reasons behind your cockatiel’s hissing. In this section, we’ll talk about how you can best react to their hissing:

If your cockatiels are hissing aggressively and it’s directed at you, it is probably because they’re in one of their moods and want to be left alone. That’s exactly what you should do to calm them down. You can check up on them again in half an hour or so.

When their hissing seems to be directed at something else, look around the room and try to figure out what could be instigating them. If you’re able to find out what is bothering them, eliminate it from the room.

In case of extreme, incessant hissing, you should cover their cage with a cloth and leave them alone until they calm down. Mostly, it takes them less than 20 minutes to stop.

If you have tried everything but cannot make their hissing stop, it is time to contact your avian veterinarian and let them handle it.

Why does my cockatiel often stand on one leg? Should I be worried?
Among the cockatiels, standing on one leg with the other one tucked close to their chest signifies that they’re in a calm state. You will usually notice them doing it when there is no one in their room, around noontime, or during nights. All healthy cockatiels do it, so you have nothing to be worried about.

Why is my cockatiel bobbing their head constantly?
The head bobbing tendency in the cockatiels is more prevalent in males, that often bob their head while talking or whistling. Sometimes, they do it to impress their owners, while other times, their head bobbing is a part of courtship behavior, used to attract their female partners. Females are known to bob their heads, too, but not as often as males.

Cockatiels are chatty little birds that are unlikely to sit quietly. They spend almost every waking moment talking, singing, or whistling.

However, the low-pitched, snake-like hissing sound produced by them is not something you’d want to hear. If you ever find them hissing, you should address it seriously and try to figure out what’s causing it.

And if nothing seems to be helping, contacting your vet would be a good idea.