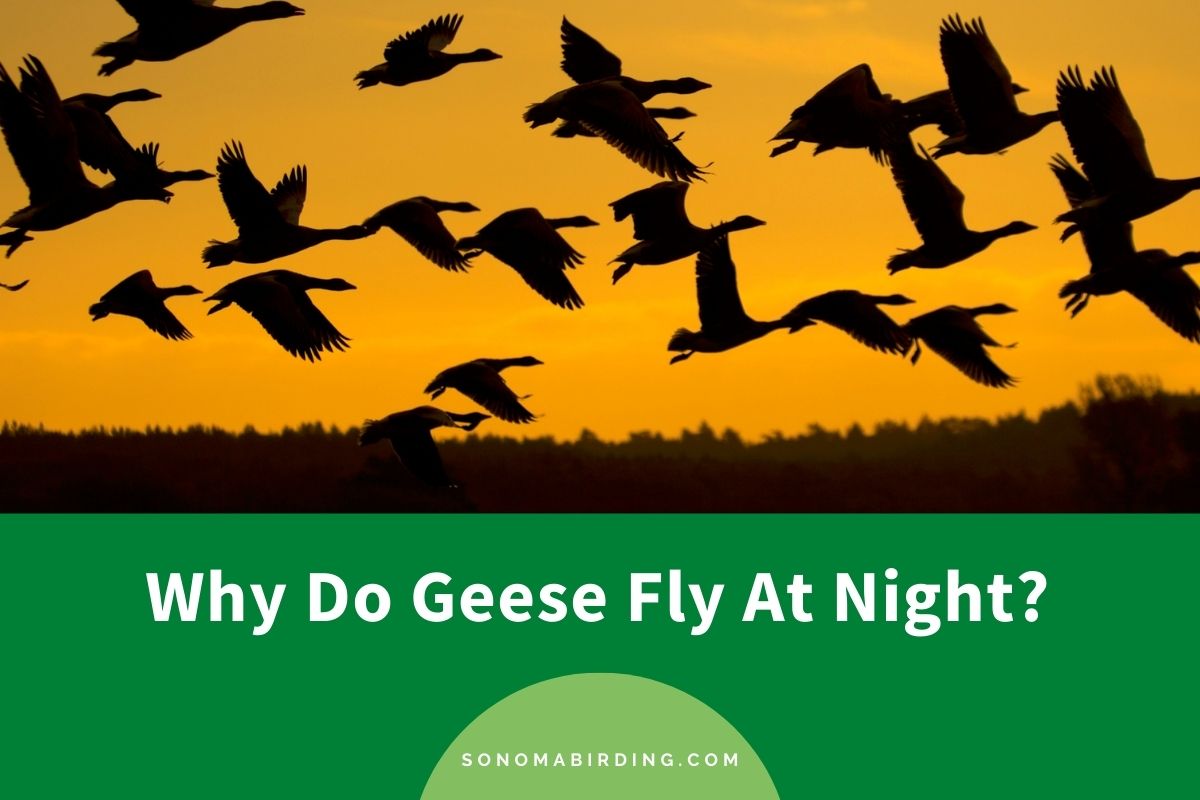 While humans believe in leading a lifestyle dictated by the sun and use the nighttime to get essential rest, not all creatures of the animal kingdom abide by this law. Many canine and feline family members, rodents, and even reptiles follow a nocturnal routine, sleeping during the day and venturing out in the dark.

The phenomenon is also witnessed in the avian world by birds like nightingales, owls, nightjars, kiwis, and bats (flying mammals). But do any of the waterfowl species also adhere to this nocturnal lifestyle?

If you’ve ever heard of a waterfowl flying around at night, it’s probably the geese. However, since geese are generally seen out and about during the daytime, does this mean they never rest? Or is there a special reason behind their nighttime flights?

Why do geese fly at night? Geese are not nocturnal birds and are known to fly at night when they migrate south in Autumn. There are three main reasons behind their nightly migratory routine: to escape their diurnal predators, to avoid thermal interruption, and to benefit from the cooler winds of nighttime.

In this article, we will attempt to resolve all your queries about the migratory behavior of geese (particularly Canada Goose), including their flight patterns and formations.

If you see any animal or bird active during the ungodly hour, it is natural to assume they must be nocturnal. However, this might not always be the case. Some birds and animals often have to take exceptional measures for food or protection.

The same is true for the geese as well. These waterfowls are primarily adapted to a diurnal lifestyle and only resort to flying at night for more convenience and safety in migration.

Since we’ll be focusing on the Canadian Geese today, let’s dig deeper into their lifestyle. They’re a North American geese species that have originated in Canada but are now found in many parts of the United States as well.

In fact, their population is considered the most abundant of all geese found within the US.

Canada Geese are one of the long-distance migrants that will travel as far as northern Europe, crossing the Atlantic Ocean. The harsh winters of North America are downright intolerable for these birds, which is why they must travel south to spend their winter months.

Now that we’ve figured why Canada Geese migrate, we can move on to learn why they must travel at night during migration in the next section.

Why do geese fly at night during migration?

It should come as no surprise to you that migrating at night disrupts the routine of the Canada Geese. So, why would they go through such inconvenience to travel south? Well, they have a good reason for it.

There are three main reasons that favor the nighttime migration for the Canada Geese, and all of these have been mentioned below:

While Canada Geese are large and have remarkable flight skills, they’re not invulnerable. In fact, their large size makes them a greater target to predatory birds like falcons, hawks, and eagles.

On top of it, their long-distance journey is quite exhausting, leaving them weaker than general and, thus, less capable of defending themselves against their predators.

Therefore, in order to avoid these predators altogether and travel safely, they opt to move at a time when these diurnal raptors roost, i.e., nighttime.

To get rid of thermals

How many of you are familiar with the concept of thermals? Thermals or thermal columns are a form of the atmospheric updraft, a column of hot air rising up in the lower altitudes of the Earth.

But how are thermals relevant to Canada Geese, or any bird for that matter? A number of larger birds use these thermals to their advantage; the rising air helps them soar higher in the sky without using too much energy.

Birds ranging from eagles and vultures to pelicans and albatrosses are all seen benefitting from the thermals.

But where do geese fit in here? Well, because geese do not soar, these thermals do not benefit them in any way. In fact, they interfere with their wing turbulence, tiring them out relatively quickly.

And since Canada Geese cannot afford to lose the precious energy they’ve conserved for their journey, they prefer to travel at night, in the absence of thermals.

To benefit from the cooler weather of nighttime

You must be wondering how the cooler weather of nighttime can help the Canada Geese on their voyage. Well, when these birds constantly flap their wings, they generate considerable heat, growing hotter. If you add to this the scorching hot sunlight, they will overheat within a couple of hours.

However, in the absence of the sun at night, these geese can fly for longer without worrying about overheating.

How do geese realize that it’s time to migrate?

Many birders have expressed their curiosity about how birds realize when it’s time to start migrating. The truth is, different birds have different indicators that tell them when to leave.

For instance, songbirds like warblers and orioles migrate to tropical regions during winters because of the scarcity of food on their breeding ground during that period. Therefore, these birds will begin their migratory journey at the first sign of food scarcity.

Canada Geese follow the same pattern as well. However, they will stay in their breeding ground for much longer until the water starts to freeze. Their migration generally begins in autumn. You will see them leaving between September and November.

The early migrants that leave in September tend to take lesser rest breaks on their way and attempt to reach their destination as early as possible. However, those that start late take longer breaks at resting spots and travel comfortably.

The mystery behind geese’s V-formation in flight

Since we’re talking about the migration of Canada Geese, there’s another common question that fascinates many bird enthusiasts: the reason behind their V formation.

There are two reasons that motivate these birds to fly in a V formation while migrating. First, Canada Geese are social birds that migrate in large flocks.

And when they’re flying in a V formation, it becomes easier for them to keep track of every goose, making their communication and coordination much easier. If you might’ve noticed it, the fighter pilots are also known to use this formation for the very same reason.

The second purpose behind the V formation is the conservation of energy. Although it might not be visible from the ground, these birds don’t fly at the same height when they fly in a V formation. The bird in the center flies at the lowest height, and each bird behind them flies a little higher.

This pattern helps them in reducing the wind resistance and staying in flight for a longer period. Since the bird in the center gets tired most quickly, they keep switching places at regular time intervals. Isn’t it genius how smart these geese are?

Conclusion: Why do geese fly at night?

As we come to the end of the article, we’ve learned that geese fly at night only on their migratory routes. And this shift in their schedule is for three main reasons; to protect themselves from their predators, prevent the thermals from tiring them out, and avoid overheating.