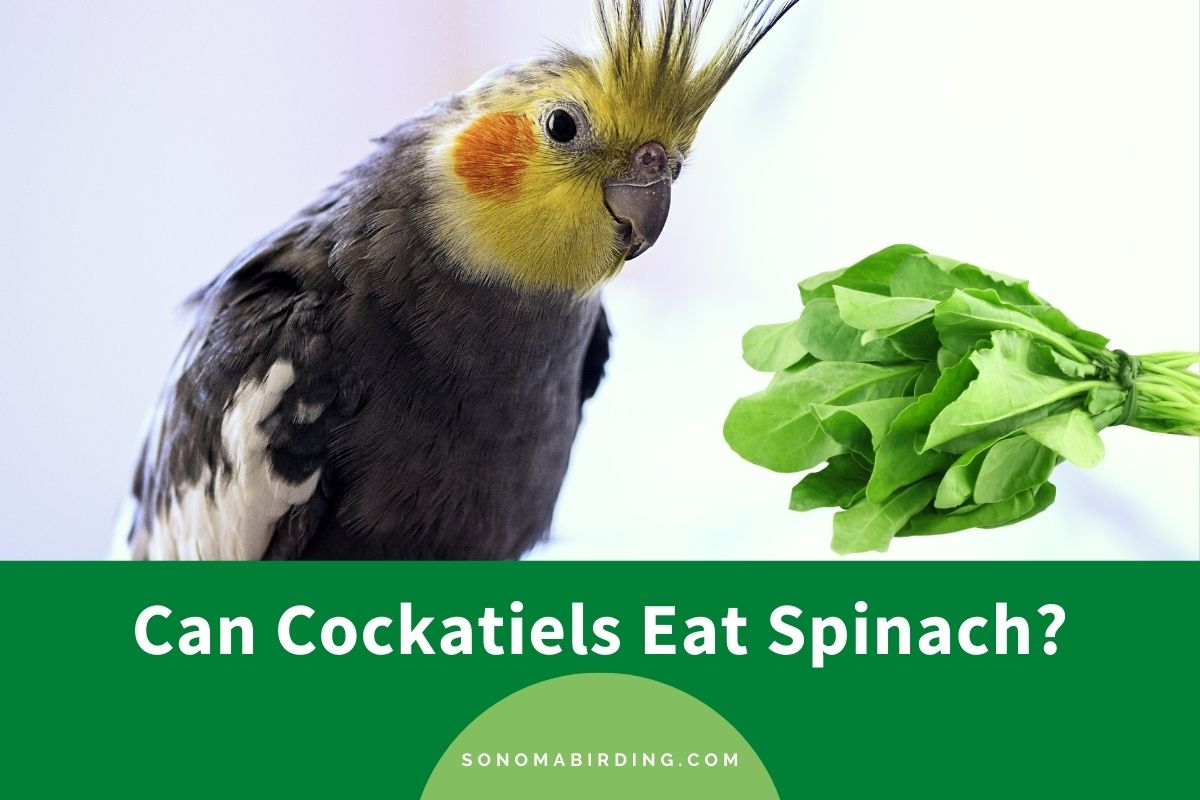 If you’re a vegetarian looking for a plant-based food that contains protein in abundance, spinach should be your go-to. These leafy greens aren’t only rich in protein but several other macro and micronutrients, making them one of the healthiest vegetables in the world.

Are you a pet parent who is curious whether your beloved pets can eat spinach, too? What about cockatiels?

Can cockatiels eat spinach? Yes, they can. Although cockatiels are primarily seed-eaters, leafy greens like spinach make up about 20% of their diet. Spinach is a nutritious treat for them both in raw and cooked form. Some cockatiels will prefer eating baby spinach to the mature ones, but both offer the same value to them. Just keep in mind that these treats should be fed to them in strict moderation.

In this article, I will tell you everything you need to know before adding spinach to your cockatiel’s diet.

When it comes to taste, the preferences of birds can vary just like us. Although they have a smaller taste palate than us, their individual taste might be different as well.

So, will your feathered friend enjoy eating spinach? Well, you can only find the answer to that by serving them spinach and observing their reaction. As a general rule, parrots seem to enjoy the subtle flavor of spinach and would eat it lovingly.

However, in case your pet cockatiel isn’t taking to spinach after several attempts, you have two choices. You can either give up on spinach altogether and look for another vegetable or get crafty and seek other methods to feed them spinach.

If you want to go with the latter, here’s how you can do it.

What to do if your cockatiel doesn’t like the taste of spinach?

Have you ever heard of baby spinach? Like baby corn, baby spinach is also the younger version of spinach, harvested much before the spinach matures fully.

Baby spinach has lighter leaves and softer stems. It also has a sweet flavor, which many people have reportedly preferred over mature spinach.

So, if your cockatiel avoids fully-grown spinach, try giving them baby spinach. That way, they will enjoy eating it and gain the same nutrients.

Another benefit of feeding baby spinach to your birdies is that you can be more flexible with the amount. Baby spinach also has a lesser oxalate content which makes it safer for them, something about which we’ll discuss more later in the article.

Is spinach beneficial for your cockatiel’s health?

While cockatiels are average-sized birds, considerably larger than the parakeets, they’re still so much smaller than we are. Therefore, as a concerned pet parent to them, it is natural to worry about their health and well-being constantly.

And since food is the main source of their nutrition, it is your job to be very careful about what you’re feeding them, even as a snack. So, is spinach a good choice for their health? Before I answer that, let’s take a quick look at the nutrition table given below:

From the table, you can easily gather how densely nutritious spinach is. But the real question is: how do these nutrients help your feathered friends? Let’s find out.

Do you want your cockatiels to have sharp eyesight, even in their old age? Vitamin A is the key to it. This vitamin not only keeps their eyesight healthy but also promotes their overall health. Additionally, the beta-carotene in it also brightens their feathers.

If your cockatiel isn’t eating enough Vitamin A, they will grow vulnerable to kidney infection, vision problems, and Psittacosis (Parrot Fever).

While all B-complex vitamins serve some or the other functions in your birdie’s body, folates are by far the most important ones. It is vital in the production of uric acid, which helps in waste removal from the body.

The deficiency of folates in your cockatiel’s diet could potentially result in:

Vitamin C plays a key role in strengthening the immune health of cockatiels, just as it does to our immunity. In addition to that, spinach also contains a number of antioxidants, which prevent oxidative damage to their cells, promoting their healthy growth.

Vitamin K is indispensable in stemming your bird’s blood flow. In other words, if your bird is Vitamin K-deficient and gets a small cut, they can potentially bleed to death.

The job of Calcium is to boost the development and maintenance of your bird’s bones and bills. The lack of calcium in their diet could lead to weaker bones and, thus, more frequent fractures.

Magnesium is a mineral that serves two main functions in your bird’s health. It is involved in the healthy growth of their bones and also regulates their body temperature.

Although the exact function of potassium in birds’ health is still unknown, it has been seen that the lack of it in their diet often leads to excess lethargy, fatigue, muscle cramps, and even breathing difficulties at times.

Iron is the basic ingredient in the production of hemoglobin, which is responsible for the transportation of oxygen in your pet’s body. The deficiency of iron in birds can result in Anemia.

Spinach contains all the macronutrients in abundance, which can be very useful for birds. Carbohydrates are their primary source of energy, protein helps the development of their bones, muscles, and feathers, and fibers promote their gut health.

The water content of spinach is 93%, which is quite unusual, even for veggies. This means that eating a small spinach treat once a day can keep your cockatiels hydrated all day long.

As a pet parent to a cockatiel, you must already know how easy it is for your little birdies to gain weight. Thankfully, treats like spinach does not add too many calories to their bodies and keep them in shape.

Have you noticed how the list of spinach’s health benefits for your feathered pets goes on and on? This is a clear indication that spinach, as a treat, has a lot to offer to your pet’s health.

Risks of overfeeding spinach to cockatiels

For those who are beginners in the world of pet birds, always remember that overfeeding your pets anything, no matter how healthy, could lead to trouble. Spinach is no exception to the rule.

If you’re wondering what could go wrong if your cockatiel eats a couple of spinach leaves more, here’s your answer:

So, now you know why you shouldn’t overfeed spinach to your feathered pets. But do you have any idea about what’s the right amount of spinach for them? If you don’t, sit tight. I’m going to tell you all about it.

The diet of a healthy, average-sized cockatiel should range between 30-40 grams in a day. Now, seeds, grains, and nuts should make up 80% of it, which means fruits, veggies, and other leafy greens, including spinach, should consist only 20% of it.

And since cockatiels love variety, feeding them the same fruit or veggie every day is not a good idea. Therefore, you should feed them spinach only once or twice a week, and the serving size should weigh no more than 5-6 grams.

Can cockatiels eat spinach stems along with the leaves?

We’ve grown up learning that the only edible part of a spinach plant is its leaves. However, that’s not entirely true. The stems of spinach are also edible and nutritious, both for us and our pets.

With that being said, these stems are not something you’d enjoy eating. They’re a bit bland and bitter than the leaves. So, if your cockatiel throws a fit about eating the stems, it’s understandable. But if they’re willing to eat the stems, you have no reason to hold back.

Raw or cooked spinach: which one is healthier for cockatiels?

As humans, we find it impossible to eat spinach, along with most other veggies, raw. However, birds are not like us. Because they lack the skills and tools to cook food for themselves in the wild, birds and animals are used to eating their foods raw.

In fact, they prefer raw food to cooked food. So, does that mean that you should serve raw spinach to your cockatiels as well? Answering that can be tricky.

While most vegetables are most nutritious in their raw form, spinach is not one of them. It is rich in oxalates, which can be detrimental to both your and your pet’s health.

However, when you cook spinach, its oxalate content decreases by about 40%, making it much safer for your consumption and that of your pet. From this perspective, it is safe to say that cooked spinach is healthier for your pets than the raw one. But that’s not all.

Raw spinach has an abundance of niacin, riboflavin, folates, and potassium, some of which get lost while cooking. So, if you want your pet to have more of these nutrients, raw spinach is the way to go.

And if all this information is making you confused, use both methods alternatively. Feed them raw spinach one time and cooked one the next.

We often buy frozen vegetables for ourselves to store them for longer and cook them later. But is it okay to feed these vegetables to our pet birds? What about frozen spinach? Can cockatiels eat them?

While frozen veggies do contain some preservatives that provide them with a longer shelf life, these preservatives pose no major harm to your cockatiels. So, if you have frozen spinach and want to share it with your feathered friend, you can do so.

However, if given a choice between frozen and fresh spinach, it is always best to go with the latter.

With this, we come to the end of the article. Above, we’ve discussed how spinach is completely safe and edible for cockatiels and other pet parrot species. Some cockatiels also enjoy munching on spinach leaves.

You can feed both raw and cooked spinach to your pets, as long as you don’t mix any spices or salt in the latter. However, keep in mind that eating too much spinach can be lethal to their health.

Why Does Your Cockatiel Hiss? What Should You Do About It?