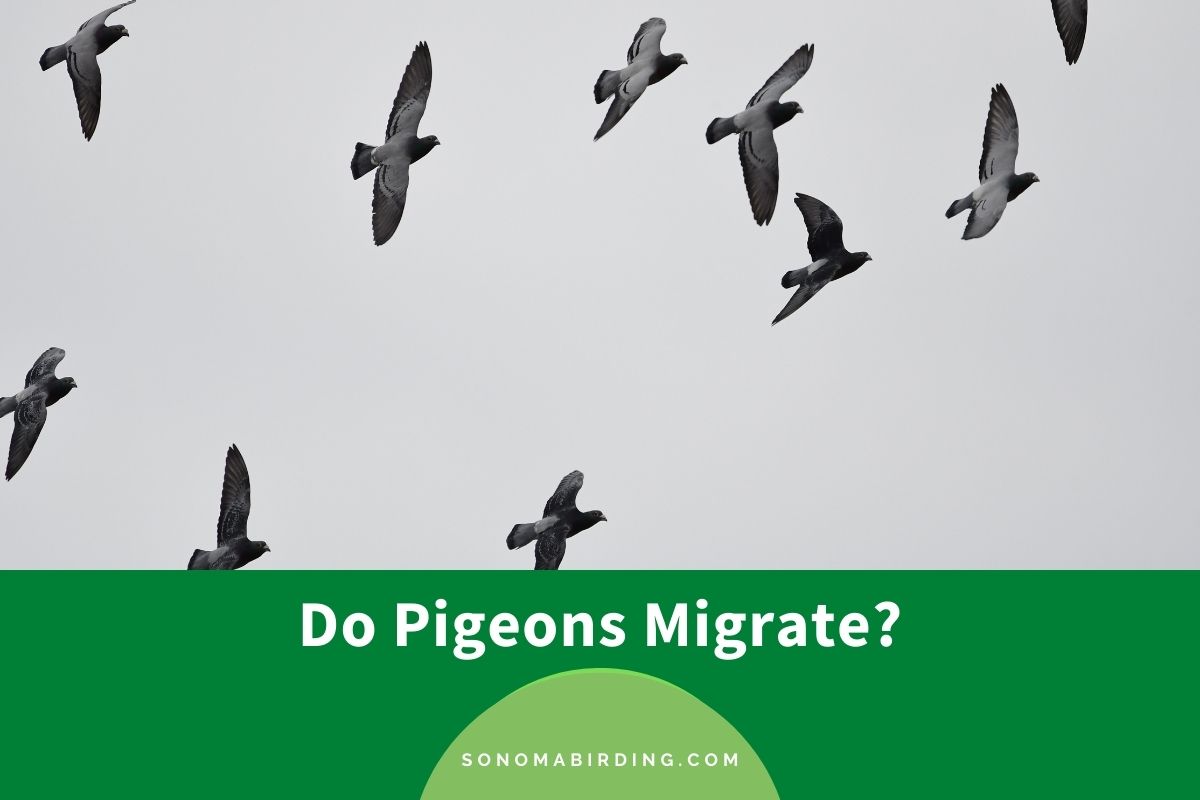 Almost all of us have had our own experiences with pigeons. While some people might label them as critters, we all can admit that these head-bobbing, cooing sky-rats are absolutely adorable when they are not creating a ruckus. These birds have adjusted in the urban areas surprisingly well due to their strong survival instincts. However, just how strong are instincts? Do they migrate during winters like the majority of the birds, or do they stay put and survive the bitter cold?

Do pigeons migrate? No, pigeons don’t migrate. With the exception of the wild pigeons, none of the other species of pigeons migrate. These birds are quite sturdy and can survive extreme temperatures. Moreover, most of the pigeon species are known to mate all year round, leaving them with practically no opportunity to migrate.

Stay with us till the end of this article, and we will tell you everything you need to know about the migration in pigeons. We will also talk about the factors which prevent the pigeons from migrating.

Contents show
Migration pattern of the wild pigeons
Reasons why feral pigeons don’t need to migrate
Their breeding cycle
The threat of predators
Winter is tolerable for them
Food sources
How can you help the pigeons?
Conclusion: Do pigeons migrate?
Related Articles

Migration pattern of the wild pigeons

Wild pigeons, or more specifically, the Band-Tailed Pigeons, are the only pigeons that migrate during winters. Breeding along the northern Pacific coast, these birds usually move to California or farther south for the winters. The pigeons located in the southwest, on the other hand, migrate to the south of the Mexican border, towards Belize and Guatemala.

However, many Band-tailed Pigeons that live in the northern cities of Vancouver, Seattle, and Portland often do not migrate. They stay in their hometown for the whole year, eating from bird-feeders that the birders set up in their backyards and gardens. Holly orchards are another food source for these birds.

You must be wondering why pigeons don’t migrate, since most other birds around you do, either to survive the cold or due to their mating and breeding seasons. Although a completely accurate explanation for their behavior is still being researched, we have some educated guesses that are probably not that far from the answer.

A very probable cause behind the pigeons’ non-migratory nature might be the fact that, unlike most birds, they do not have a specific season for mating and breeding. They can breed in both the spring and autumn.

If they were to migrate to take care of their young ones, it would mean two treks, to the place and back, in one year. And while it doesn’t sound like a lot to us, it is can be extremely time-consuming and tiring for the pigeons.

If they are flying when they are tired, the pigeons might even end up becoming prey to predatory birds like eagles and hawks.

The threat of predators

Every year, many birds lose their lives during their annual migration due to the threat of predators all around them. Pigeons are no exceptions to this rule. Almost all the birds which are larger than these birds in terms of size prey on them. Below, we have listed some of the pigeons’ common predators:

In the avian world

Winter is tolerable for them

As we have mentioned before, pigeons have powerful survival instincts. In fact, they can survive in cold temperatures of around -40 degrees Fahrenheit. Their seemingly fine feathers are actually thick and build to insulate heat. Pigeons can also be very resourceful in terms of food when they have to be; they can eat both human food and the occasional insects.

When winter arrives, these birds find shelters in the warmer areas within their range. They also build warm nests by lining them with leaves, shrubbery, or even garbage if that is all they can find. However, a few individuals often travel a short distance to a warmer place nearby if they sense a particularly harsh winter coming their way.

Nevertheless, the pigeons living in urban areas do not need to migrate at all, as these places have an abundance of warm shelters for them. Ventilators, attics, and warm roofs are some of the places where they can snuggle up comfortably.

Pigeons that have learned to live near humans already have a steady food supply, regardless of the season. And as for providing their young ones, they have a small convenience there, too.

You see, pigeons don’t have to fetch food for their fledglings, per se. They only need to find sufficient food for themselves. They can produce crop milk, a substance made up of plant and bird juices, which they then feed to their younger ones.

As long as these birds can find food for themselves and feed their babies, they do not have any real need to migrate to a place with an abundance of food sources.

How can you help the pigeons?

While we have already established that pigeons are pretty efficient in looking after themselves, some of them might struggle to find warmth and food during the winters. If you’ve ever seen a corpse of these birds lying in the snow during winters, you already know that not all of them have mastered the art of survival. These problems usually occur with inexperienced juveniles that are yet to learn essential survival skills.

What if we told you there were things that you can do to make the harsh winter months easier on the pigeons? If it sounds like something you’d be happy to do, here are some measures you can take for it:

All these steps might not seem like a big deal to you, but they can literally save the lives of the pigeons that are incapable of fending for themselves.

Let’s return to our initial question: do pigeons migrate? No, they don’t. Pigeons are one of the few bird species that do not migrate from the United States during the winters but stay put and survive it.

And if you take a deeper look at their lifestyle (breeding cycle, the threat of predators, and more), you will realize that not migrating is a much safer and more profitable prospect for them than migrating.

The steadily growing population of these birds, both in the States as well as worldwide, is proof that remaining non-migratory is ideal for them.

Do Doves Mate For Life?