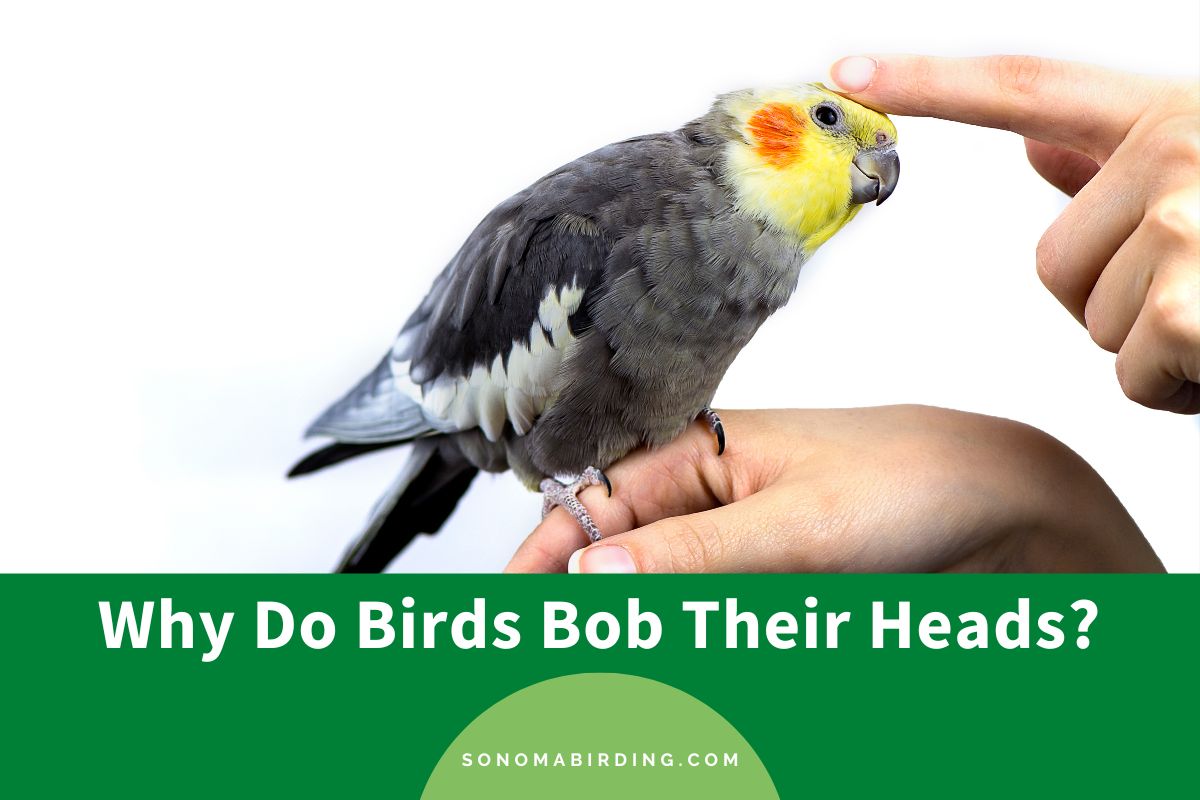 So if you’re curious about why birds bob their heads, read on!

Contents show
Birds that bob their heads
Reasons behind birds bobbing their heads
1. Stabilizing their vision
2. To detect their prey
3. An act of courtship ritual
4. A part of communication
5. To help swallow down food
Head-bobbing while walking: Why do pigeons do it?
Parrots and their head-bobbing
1. Out of hunger
2. When they’re bored and need playtime
3. Could they be mad at you?
What does it mean if a bird is bobbing its head at you?
Related Articles

Birds that bob their heads

Before we delve deeper into understanding the head-bobbing behavior, let’s first learn about the birds in which this behavior is most commonly observed.

According to recent data, there are over 11,000 recognized bird species in our world today. But does every single one of them practice head-bobbing?

Well, it’s difficult to give an inclusive answer, but of the birds you commonly encounter – songbirds, chickens, waders, corvids, and so on – just how many have you caught bobbing their heads? Surely not all of them?

Here’s a list of the birds that are most commonly spotted bobbing their heads, especially as they walk:

Did our list pique your curiosity about the reason that leads these avian creatures to move their heads up and down like that? Keep reading to find the answer!

Reasons behind birds bobbing their heads

You’ll be surprised to find that not one but multiple factors contribute to birds bobbing their heads. In fact, different birds bob their heads for different reasons! Let’s explore each reason in depth now!

Did you know that birds have the largest eyes in the entire animal kingdom? But how can that be, considering how small they generally are? Well, their eyes are the largest in relation to their size and not in comparison to other animals. They can also change the shape of their lens both much faster and to a greater extent than mammals, but that’s a discussion for another time.

Because birds are flying creatures, they naturally require better eyesight than land-dwelling animals, and Nature has blessed them with exactly that: a vision superior to all other vertebrates.

Coming back to the size of birds’ eyes, because they take up a lot of room within the sockets, there’s little room for movement in the orbits. In other words, this means that because birds cannot move their eyeballs to see things as we do, they move their heads to do it. This movement of their heads is what we perceive as head-bobbing.

Because the eye anatomy of almost all birds is similar, visual stabilization is the most common reason behind them bobbing their head.

2. To detect their prey

Just as smaller birds like pigeons and starlings suffer from limited vision, so do the large birds of prey. And because they need to hunt down other birds (or mammals) on a daily basis to survive, it’s essential for them to have a sharp sense of prey detection.

It is in order to hone this skill that raptors like owls and hawks are often seen bobbing their heads when perched. What might merely seem like a bobbing head to you is actually their process of keenly observing their prey, calculating the distance between them, and figuring out how to best make an efficient hunt.

Apart from bobbing, the raptors are also seen moving their heads forward, back, and at times even completely upside down.

3. An act of courtship ritual

It is common knowledge that among all the animals in the world, birds have the most elaborate and intricate courtship rituals. While the concept of monogamy is lost to a majority of bird species, they certainly take mating and reproducing very seriously.

Different birds have different courtship rituals that they perform to attract a suitable mate for themselves. Some of the common rituals include dances, flight performances, songs, prospective males fighting one another, and bringing food to the females.

Head bobbing is also a part of the courtship rituals of some species, especially the ducks. Mallard Ducks are a perfect example of this behavior, wherein the males and females bob their heads together rhythmically before they mate.

4. A part of communication

While birds might not be able to speak like us, it doesn’t mean they don’t have a common language that they use to communicate with each other. Only, unlike words, their languages are made up of calls, gestures, and signals.

In some species, head-bobbing is used as a signal as well. Take Northern Flickers, for instance; these woodpeckers are highly territorial and bob their heads aggressively at anyone trying to trespass. It’s their way of threatening the trespasser, as if saying, “Back off! Or else…”

5. To help swallow down food

When raptors like eagles and hawks hunt for prey, they tear down their flesh before eating them. However, not all avian creatures are blessed with such sharp bills.

For example, when wading birds like herons catch fish, they don’t have the liberty of taking smaller bites and need to gulp it down at once. At times, when they feed on a particularly large fish, they’re bound to have trouble swallowing it down their thin necks, and head bobbing seems to help them with it.

Head-bobbing while walking: Why do pigeons do it?

You’ll have to agree that the most commonly seen demonstration of birds bobbing their heads around the world is of pigeons. But did you know that what appears like head-bobbing to you is actually pigeons trying to keep their heads steady? Let’s break it down for you.

The walk of pigeons can be divided into two movements:

In the first movement, they keep their head steady in relation to the ground while their body moves forward. This momentary pause helps them take in a clear image of their surroundings, which is only possible when their heads (or eyes, to be more precise) are steady.

In the second movement, the head moves forward to catch up with the rest of the body.

When seen in action, it looks like they’re bobbing their heads while walking to us, while all they’re trying to do is avoid any mishap on the way.

Parrots and their head-bobbing

Besides pigeons and doves, the family of parrots is also quite famous for their wildly bobbing heads. And while most pet parents find it adorable, we can understand how it might seem confusing to a new one. It has to mean something, doesn’t it?

Well, here are three common instances where parrots are known to bob their heads:

Bobbing their heads when hungry is a classic baby parrot trait. In the beginning phase of their lives, baby parrots aren’t independent and rely on others for survival, particularly food. In the wild, these infants are known to bob their heads at their parents to indicate that they’re hungry.

In captivity, they look up to their pet parents to help them with it. So, if you’ve brought an unweaned parrot home, be careful about these head signals to keep them well-fed.

And while most parrots outgrow this habit as they mature, some are known to retain it as adults and constantly bob their heads when they need a refill.

2. When they’re bored and need playtime

Parrots are one of the most social species in the avian kingdom. For this reason, if you’ve brought home a single parrot, make sure that you spend quality time with them and keep them entertained.

When left alone for too long, they begin to get bored and start seeking your attention. Bobbing their heads at you is just one of their tricks for it.

Anyone who has owned a parrot knows well that these birds can be quite short-tempered. A simple change in their routine, the arrival of a guest, or your over-indulgence with a new bird or animal can easily piss them off, and they have various ways of showing it.

Bobbing their heads is just one of these ways; only when angry they’ll move their head more vigorously and might even hiss if you try to touch or pet them.

What does it mean if a bird is bobbing its head at you?

Now that we’ve understood all about birds and their bobbing head, let’s ask you this: Have you ever found a bird bobbing its head at you?

If you have, what did you think it meant? Could it be their way of trying to send across a message? Or is it an omen? Well, as we talked about earlier, the most obvious reason behind a bird doing that is curiosity. It’s possible that they’re trying to recognize you or view you as a threat.

And if it’s your pet bird that’s bobbing its head at you, well, you’d be able to tell what caused it way better than us.

Why Do Geese Fly At Night?

Why Are Cardinals Red?