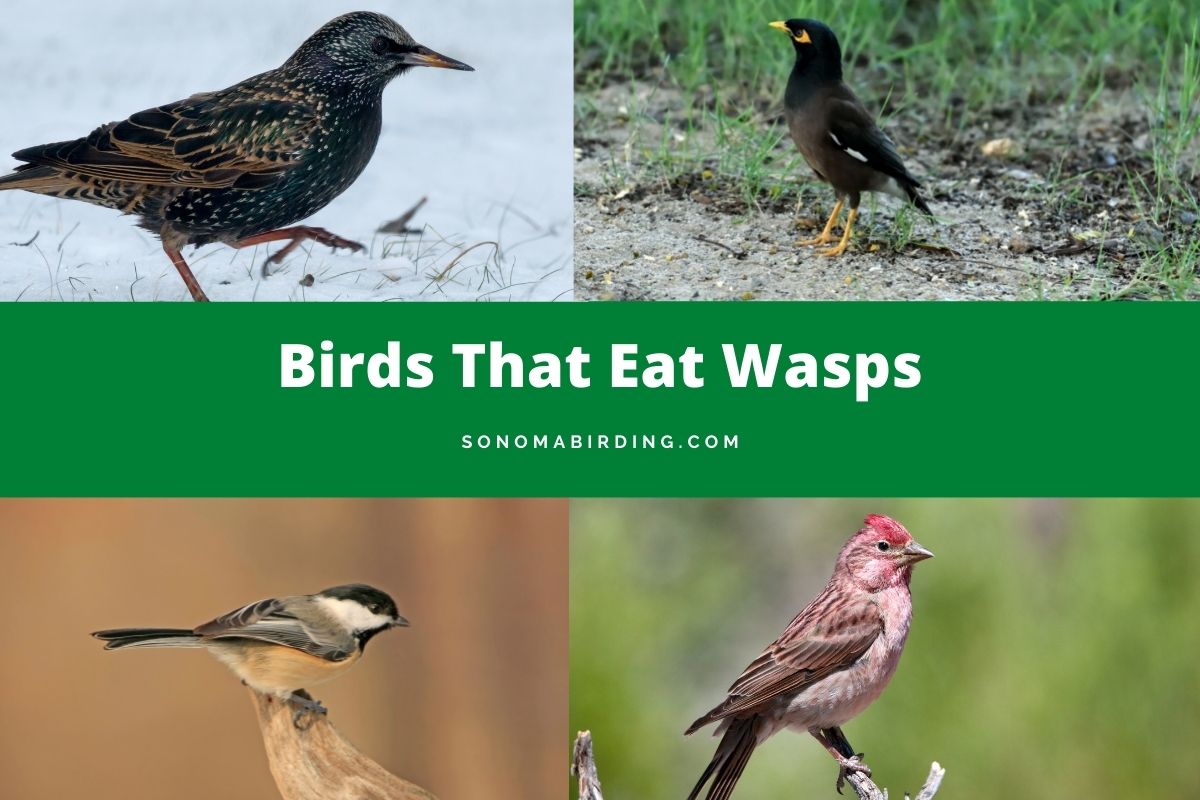 Wasps are tiny flying creatures that wreak havoc in your home if they’ve built their nests inside it. Not only can they sting you, but some species are also fond of eating wood and can damage your furniture.

Although there are numerous pest control facilities that you can contact to get rid of your wasp problem, you can also deal with them naturally. Wondering how? By letting the wasp-eating birds feed on them.

Here are 13 birds that eat wasps:

Wasps are a diverse family of large, carnivorous, flying insects with over 30,000 recognized species globally. And while they’re among the top rankers of the insect food chain, they live in fear of their avian predators as well.

In this article, we’ll take a look at the primary predator bird species that actively hunt and feed on wasps. Furthermore, we will also talk about how you attract these wasp-eating birds to your yard.

As their name suggests, the European Starlings are a starling species that is endemic to Eurasia. However, due to their invasive nature, these birds are also found in North America, South America, New Zealand, Australia, South Africa, and other parts of the world.

These starlings have a narrow, sharp-edged bill and stout, reddish legs. Their dark plumage is covered in greenish or purplish gloss. Both sexes of European Starlings display sexual dimorphism during specific parts of the year.

The underparts of female starlings are heavily spotted in comparison to their male counterparts. Females also possess smaller, edgy throat feathers, unlike males with long and loose feathers on their throat.
Both sexes develop prominent white speckles on their chest during the winter.

Yes. European Starlings are quite fond of consuming insects and often catch them mid-flight. Insects like wasps, beetles, grasshoppers, and caterpillars are their favorite.

Common Mynas are an invasive starling species endemic to Asia. These birds have two recognized subspecies: the Indian and the Sri Lankan Myna.

These birds are easily identifiable. Their legs and bill are bright yellow in color; they also have matching eye patches (one behind each eye). Their upper body is mostly dark brown, with white bars on their wings.

Their undersides are brown as well, with only the ventricle parts being pale white. The adults display no sexual dimorphism and are identical. You’ll often spot them in pairs.

Yes. Although Common Mynas are omnivores, a large part of their diet consists of insects. While these birds enjoy foraging for insects on the ground, it is not uncommon for them to go after wasps as well.

The Black-capped Chickadees are tiny North American birds belonging to the Paridae family, consisting of tits and titmice.

Just as their name suggests, these birds have a bold black cap atop their head, which extends to a black bib on their throat. Their underparts are white, with pale rufous flanks on both sides. The back, wings, and tail of these birds are slaty-gray in color.

Both sexes of the Black-capped Chickadees appear similar, displaying sexual dimorphism only in their size. The males are slightly larger than their female counterparts.

Yes. Black-capped Chickadees are opportunistic feeders that have an insect-based diet. These birds enjoy feeding on insects and their larvae. Wasps and their grubs are a primary food source for them.

These birds are mainly grayish-brown in color and have dark brown marks on the side of their body. They have a short bill, a long, roundish tail, and dark brown irises.

Both sexes appear identical in their plumage, although the males are larger in size than their female counterparts.

Yes. Cassin’s Sparrows have a diet consisting of seeds and insects. While they eat seeds almost exclusively during the winters, in summer and spring, insects like wasps, mantises, spiders, bugs, weevils, and crickets are their primary food sources.

The Hepatic Tanagers have been named after the plumage coloration of the males of their species. As evident from their name, these birds were initially placed in the tanager family but have now been moved to the Cardinal family.

These birds have a short, stout bill and dark irises. Both sexes have a differently colored plumage; the males are liver-red (hepatic) in color, while the females are dull yellow with a touch of olive. Both sexes have dark eye streaks and grayish flanks.

Yes. Hepatic Tanagers are primarily insectivores that occasionally eat berries and fruits. Among the insects, beetles, caterpillars, wasps, and their grub are their favorite.

Commonly referred to as the “American Magpie,” the Black-billed Magpies are a corvid species that inhabits the western regions of North America.

These birds have a long tail (about half of their entire body length) and a thick plumage (thicker than other North American magpie species).

Although both sexes of the Black-billed Magpies appear identical, much like the other corvids, the males are significantly larger and heavier than their female counterparts.

These birds have jet-black heads and breasts, with contrasting white bellies and underparts. Their back, wings, and tail are also black, with a bold white bar on each wing. On their feathers, you will find a touch of iridescent blue.

Yes. The Black-billed Magpies have a diverse diet, including grains, fruits, and insects. Although they prefer to forage for insects on the ground, when given the opportunity, they wouldn’t mind eating wasps either.

Known for being the largest member of their genus (Sialia), the Eastern Bluebirds are a North American thrush species.

As their name indicates, these birds have plenty of blue in their plumage, the males more so than the females. Both sexes are sexually dimorphic in plumage.

The males have a bright blue head and upper parts (back and wings). Their breast is covered with an orangish patch, below which they have white underparts.

On the other hand, the females have a mostly gray head with pale touches of blue and pale blue wings. The rufous tinge on their breast is duller than their male counterparts as well.

Yes. Insects are the primary food source of Eastern Bluebirds. They commonly feed on wasps, termites, ants, bees, and moths.

Due to their close relations and similar appearance with the grackles, the Rusty Blackbirds were initially referred to as “Rusty Grackles.” They’re a vulnerable blackbird species of North America.

These birds have an overall black plumage, with pale greenish iridescence covering their body. Their dark, pointed bill stands in contrast with pale yellow eyes.

The “rusty” in their name indicates the color of their winter plumage. Both sexes are identical and display minimal sexual dimorphism.

Yes. Insects make a large part of Rusty Blackbirds’ diet. Although they mainly feed on water insects like water beetles, dragonflies, and mayflies, other insects, such as wasps, grasshoppers, and crickets, are consumed by them.

Known for their rich, bubbly songs, the House Wrens are a tiny wren species primarily found in the floodplain forests of North America. They have been named after their tendency to adapt to practically any habitat.

House Wrens have a greyish brown head and upperparts covered with heavy streaks, while their underparts are pale grey or buff in color.

Yes. House Wrens are one of the birds that consume wasps regularly. These wrens will not only eat the adult wasps but often feed on their grubs, too.

The Gray Catbirds are medium-sized passerine birds of the mimid family endemic to North and Central America.

Just as their name suggests, they are covered almost entirely in lead-gray, with a darker touch on their head, wings, and tail. Their legs, feet, eyes, and bill are also dark in color.

The adult Gray Catbirds display no sexual dimorphism and are identical in appearance. The only way to tell them apart is by their breeding behavior.

Yes. Gray Catbirds are omnivores and enjoy fruits as much as insects. However, these birds mainly feed on ants, midges, beetles, grasshoppers, and wasps in the summer and spring seasons.

Blue-winged Warblers are a widespread New World Warbler species found in eastern parts of North America. Although these birds have “blue” in their name, their wings are not really blue, but a shade of pale grey with a bluish touch.

Blue-winged Warblers have a thin yet heavy bill and display sexual dimorphism in their plumage. The males have a bright yellow head and underparts, with a jet-black lining above their eyes. Their back is grey, with characteristic greyish-blue wings.

On the other hand, the females have a pale-yellow head and underparts and duller wings, with an eye lining that is much less prominent than their male counterparts.

Also referred to as “Bull-bats,” the Common Nighthawks are a nocturnal species of the nightjar family that are endemic to the Americas.

These birds have a large, flat head, long and pointed wings, and a forked tail. Their short necks further highlight their big-headedness. The coloration of their body is camouflaged with white, buff, grey, and black.

Both sexes of Common Nighthawks display different colorations and patterns but are similar in size.

Yes. Common Nighthawks are a carnivore species that feed exclusively on insects like wasps, mayflies, crickets, grasshoppers, caddisflies, and so on.

These birds have a long tail, almost half the length of their entire body. They have a grey head and upper body and pale, whitish-grey underparts. Their wings and tails have dark edges, with two white wing bars (one on each wing).

The adult Northern Mockingbirds do not display sexual dimorphism; both the males and females appear identical.

Yes. Northern Mockingbirds consume an insect-based diet in the summer months. Wasps, bees, grasshoppers, and ants are their most common prey.

Have you ever wondered how the birds mentioned above can eat wasps without getting stung?

Well, these birds are not immune to wasp stings but devise ingenious methods of getting to the wasps without being stung.

The most common strategy of these birds is to target the solitary wasp species instead of the social wasps. It is because the former are more docile in nature and wouldn’t try to sting a bird much larger than themselves when alone.

Some bird species, particularly the tanagers, graze the wasps against tree bark to break their stinger. And once the wasp is defenseless, they feed on them fearlessly.

Lastly, most wasp-eating birds have thick facial feathers that can lessen the impact of a wasp sting.

Attracting wasp-eating birds to your yard

Learning about the wasp-eating birds is only half the solution; the other half lies in attracting them to your yard so that they can take care of your wasp problem.

In this section, we’re going to talk about some quick tips that can help you invite the wasp-eating birds to your backyard:

Wasps might be small, but they’re extremely aggressive in nature, particularly the social wasp species. Therefore, if these insects build a nest in or around your house, you must deal with them as soon as possible.

In these circumstances, your backyard birds can be a huge help. The wasp-eating birds that we have talked about in the article are easy to attract and can take care of your wasp infestation problem naturally and effectively.