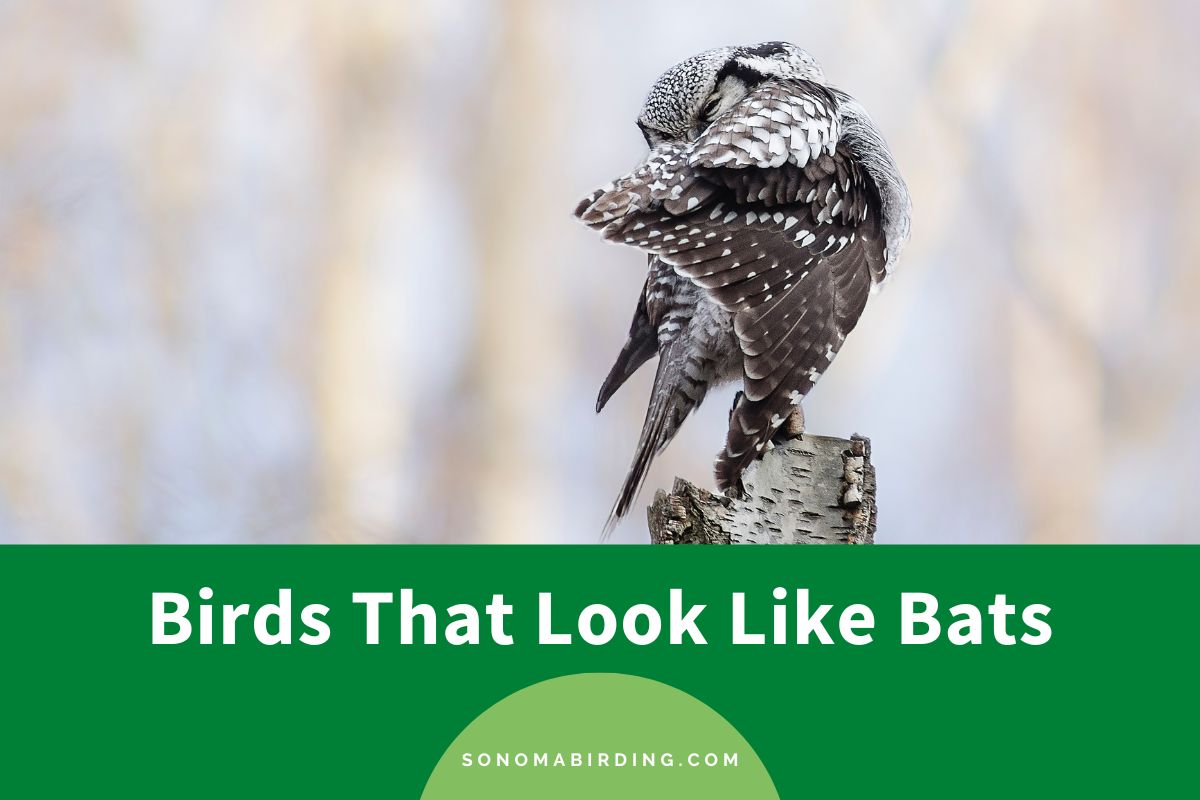 Bats are like tomatoes in the world of food. Because tomatoes grow from the fertilized ovaries of the flowers in the tomato plants, botanists consider them to be fruits. However, due to their vegetable-like use in the culinary world, nutritionists call them vegetables.

Similarly, bats were believed to be birds because of their ability to fly. But their nature of giving birth to their young ones and feeding them their own milk for nourishment makes them mammals. In other words, they’re flying mammals, making them one of a kind.

But are bats truly one of a kind? This might come as a surprise to many, but there are other birds that have been confused with these mammals occasionally. But not up close and in the light of day. In this article, we’ll talk about four birds that might look nothing like bats but are often confused for them in flight during dusk. 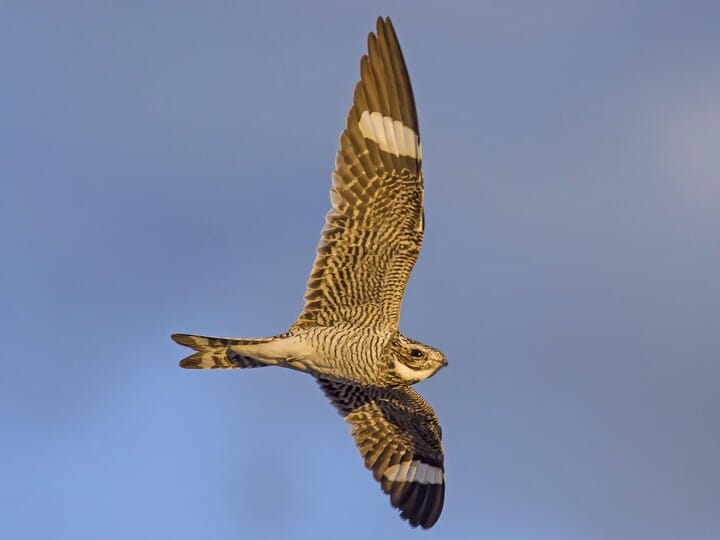 Belonging to the nightjar family, the Common Nighthawks are medium-sized birds that are nocturnal or crepuscular in nature. They also happen to be the only nighthawk species with presence in the majority of North America.

Just like the other nighthawks, these birds also possess camouflaged plumage that helps them blend in with their background. This camouflage keeps them safe from their predators during the daytime when they’re resting and, thus, more vulnerable to any threat.

Common Nighthawks have greyish-brown heads, dark brown eyes, and black bills surrounded by bristles that help them hunt for food. Their upper parts are colored just like their heads but with heavier streaking. The underparts are slightly paler in comparison with buff flanks.

These birds also possess a pale collar on their nape along with a white throat patch. Both sexes of these birds are similar in appearance, except for minute differences in their wings. While the males have white spots on their wings along with white wing tips, the females lack any spotting and have yellow wing patches instead.

Common Nighthawks have no physical traits similar to bats, except for one: their wings are long and curved backward, lending them a bat-like impression when in flight. Another similarity between them includes their nocturnal nature, i.e., the tendency to hunt at night.

Common Nighthawks also have an erratic flight style. This is perhaps why, when people spot them flying in the dark, they confuse them for the bats. A confusion between Common Nighthawks and bats is so common in the United States that in many areas, they’re referred to as bullbats. 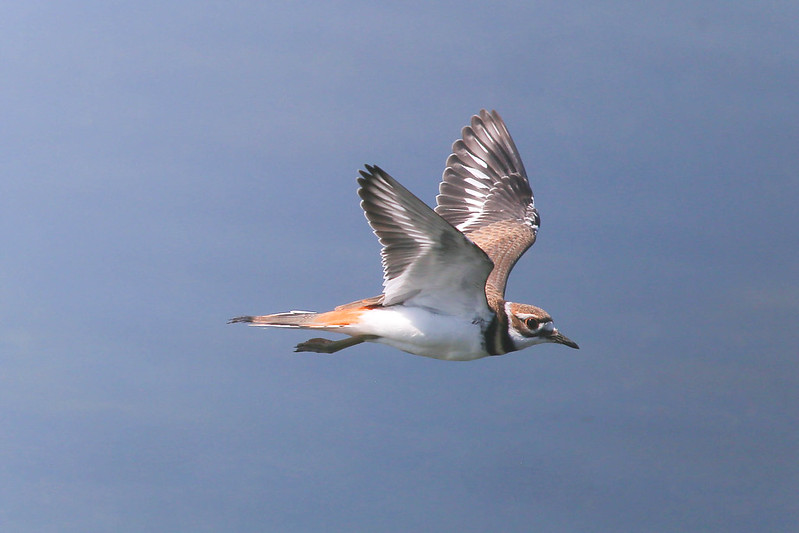 Named after their shrill, wailing call that sounds like kill-deer, the Killdeers are a large plover species that inhabit the coastal wetlands, beaches, and fields of the Americas.

While both sexes of the adult Killdeers appear almost identical in size and plumage, there are some differences that set them apart. The males possess black bands around their eyes and on their throats, whereas these bands are significantly browner in their female counterparts.

Killdeers are opportunistic insectivores, feeding on insects almost exclusively. And although they’re diurnal in nature, on nights of a full moon, you can see these plovers foraging in the dark to take advantage of the large crowd of insects flying around.

It is on nights like these that the long-winged Killdeers are mistaken for bats. Because their white undersides (which stand in stark contrast with the bats) are not clearly visible in the dark, you might have difficulty recognizing them. 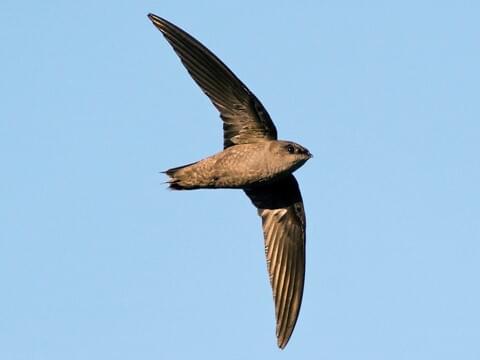 Named after their notorious tendency to build nests in chimneys, the Chimney Swifts are a vulnerable swift species found in the Americas. These birds breed in the eastern regions of Canada and the United States and migrate to South America during winters.

Chimney Swifts have dark olive upper parts, with greyish-brown underbodies and pale rump. Their throats are visibly pale as well. They have dark brown eyes, black legs, feet, and bills, with long, narrow wings that curve towards edges and have pointed wingtips.

Both sexes of this species look identical, displaying dimorphism in size, with the males being heavier than their female counterparts.

Due to their small size and long, slender, and dark bodies, these birds are often called Flying Cigars or Cigar with wings.

Unlike the bats, the Chimney Swifts are diurnal birds, which is why both these birds are rarely out and about at the same time. The only scope for confusion between the two is at dusk, when the swifts return to the chimneys to rest, and the bats are coming out to start their day.

In the dim light of dusk, when you spot a flock of swifts and a colony of bats crossing paths in the sky, it’ll be difficult for you to tell them apart. 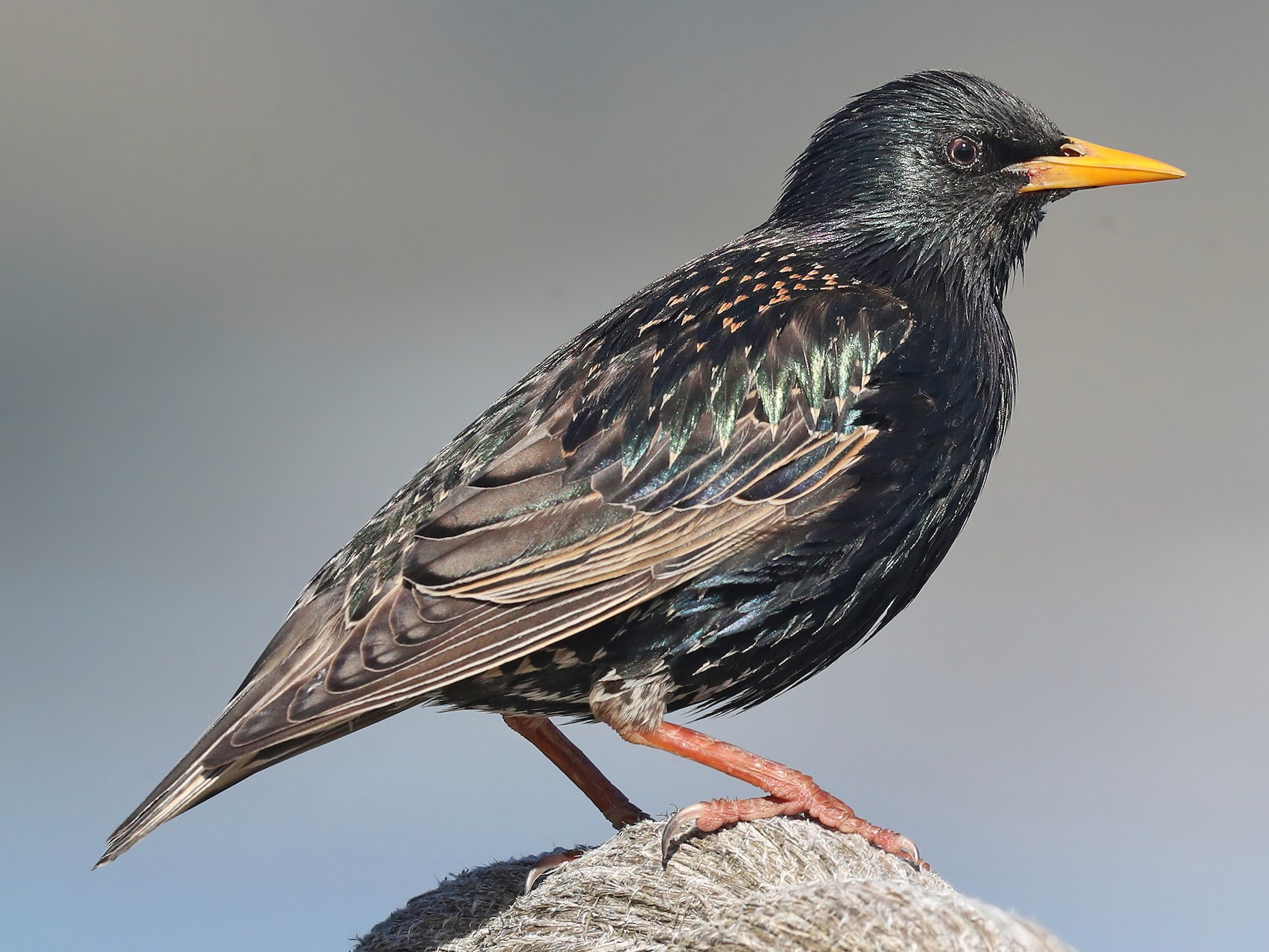 Also referred to as European Starling, the Common Starlings are a medium-sized starling species that have an abundant population in both Europe and North America.

These birds have an overall black plumage with the iridescence of blue, green, and purple. Their eyes are dark, with yellow bills and reddish feet and legs. During winters, their plumage is covered with white speckles, and bills turn brownish.

While both sexes of adult Common Starlings appear almost identical, there are some minor differences that set them apart. The females have more heavily spotted undersides than their male counters. Their bills have a pinkish base in Summer, while the base of males’ bills is bluish. Lastly, their eyes are dull brown, unlike the rich, chocolate brown eyes of the males.

Although Common Starlings are diurnal birds, unlike the bats, the two can cross paths at dusk, when starlings are returning home, and bats are coming out. This can lead to confusion since both of them possess dark plumage.

The best way to distinguish between the two during such times is to focus on their flight pattern. Common Starlings can’t see very clearly in the dark, which is why they’d try to get to safety as soon as possible and fly in a straight direction. On the other hand, the bats that are just getting out would fly in circles, often to catch a bug or insect.

With this, we’ve reached the end of our article. Let’s do a quick revision of all we’ve learned today.

We began by talking about bats and the ways in which they resemble both birds and mammals, making them unique in the avian world. Later, we moved on to discuss other birds that are often confused for bats. Since bats are quite different from other birds in appearance, the scope for confusion is limited to dusk, when there’s very little light to get a clear look at them.

Is there any other bird on your mind whose lookalikes you’d want to know about? Let us know in the comments below, and we’ll be back with a list soon.

7 Birds That Fly in V Formation